GSP vs. Diaz Back On, Likely for UFC's Super Bowl Card 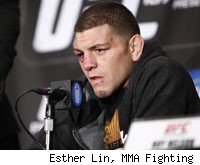 LAS VEGAS – The welterweight showdown between Georges St-Pierre and Nick Diaz that was supposed to headline UFC 137 on Saturday needed all of about 90 minutes after the card to be back on.

UFC president Dana White said at Saturday's post-fight press conference that Carlos Condit has agreed to step aside from his pending title fight with welterweight champ St-Pierre – so Diaz could move in for the title shot. The planned headliner is expected to take place as the main event of the UFC's pay-per-view on Super Bowl weekend in Las Vegas, White said.

Diaz, who vacated his Strikeforce welterweight title to come to the UFC, was originally scheduled to fight St-Pierre but was removed from the bout when he failed to show for a pair of press conferences earlier this fall. In his place, White gave Condit the title shot and put Diaz against BJ Penn, a fight he dominated on Saturday in Las Vegas. But St-Pierre was injured earlier this month.


More Coverage: UFC 137 Results | UFC 137 Post-Fight Press Conference
The potentially complicated waiting game, however, was made a lot simpler when White said St-Pierre "flipped out" over Diaz's post-fight comments in the cage. White made a call to Condit, Condit agreed to put his title shot on hold, and the St-Pierre vs. Diaz welterweight title fight became a reality and got a date much quicker than anyone could have expected before Saturday night.

After beating Penn – and potentially sending him into retirement – Diaz told Joe Rogan he believed St-Pierre was not truly injured. "I don't think Georges is hurt. I think he's scared," Diaz said. The cameras inside Mandalay Bay Events Center cut to St-Pierre, who was sitting cageside after helping corner his TriStar Gym teammate Francis Carmont.

White said he saw a side of his welterweight champion backstage after the event that he hadn't seen before.

"Let me put it to you this way," White said. "I've known Georges St-Pierre since 2004 and he's one of the nicest guys I've ever met. He's exactly the same no matter what the situation is, no matter who he's fighting. Since 2004, I've never seen him like he was tonight. Georges St-Pierre flipped out tonight after Nick Diaz was in the ring. Nick needs motivation, he's got it – he's going to fight Georges St-Pierre. Carlos Condit has agreed to step aside and fight the next guy."

"This is what I wanted since the beginning," St-Pierre said in a statement. "Let's do what was supposed to be done originally. I've always wanted this fight – now I want it even more. I can't wait for Super Bowl weekend."

White added at the press conference that St-Pierre was adamant about how he wants his title defense against Diaz to go down. St-Pierre has defended his welterweight title six times since reclaiming it from Matt Serra at UFC 83 in April 2008.

"(St-Pierre) said, and I quote, '(Nick Diaz is) the most disrespectful human being I've ever met, and I'm going to put the worst beating you've ever seen on him in the UFC,'" White said.

Diaz stole the press conference on a night that saw the likely retirements of legendary fighters Mirko "Cro Cop" Filipovic and Penn, oftentimes nearly rambling about everything from the houses in his Stockton, Calif., neighborhood to why no one wants to help him prepare for fights. He said being the villain is what works to get him fights.

"You've got to come off like that just to get a fight," Diaz said. "Know what I'm saying? I've got to be the bad guy. You point the finger, make me the bad guy, and now I get to fight."

As for Condit, he goes from a title shot against St-Pierre to a top contender's fight, expected for the same card on Feb. 4 in Las Vegas. White did not reveal who that opponent will be, but possible candidates would likely include Jon Fitch and Jake Ellenberger, who upset Diaz's training partner Jake Shields last month.