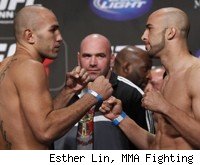 LAS VEGAS -- This is the UFC 137 live blog for the four non-televised bouts in support of tonight's UFC pay-per-view card at the Mandalay Bay Events Center.

Round 1: Lots of circling early as Jacoby circles the outside of the cage. Starks lands a right cross but Jacoby takes it well. Tight right by Jacoby moments later. Starks answers back. Action is slow-paced but most of the strikes thrown have been power shots. Both men working hard with their footwork to cut off angles. Starks counters a hook with a right hand that scores. Starks goes to the body. One minute left. Starks chases Jacoby across the cage but doesn't land much. Starks scores a takedown with :30 left. Jacoby hunts a kimura but Starks defends as the round closes. It's Starks, 10-9.

Round 2: Hard right hand early by Jacoby, his best strike of the fight so far. Starks circles away, and looks fine. Jacoby uses a spinning heel kick that only partially connects. Left hook from Jacoby. Starks times a right that scores as Jacoby leans in. Starks takes Jacoby down with two minutes left. Jacoby does a good job keeping a tight guard but Starks occasionally sneaks in a right hand to the body or head. The late second is all Starks', and he steals it away 10-9.

Round 3: The straight right is Starks' money punch, and he lands it again early. The two exchange. Jacoby lands a knee from the clinch. Moments later, Starks shoots and takes him down. Jacoby keeps a tight guard but he's behind and probably needs to be more aggressive. Starks passes to half-guard. Jacoby again looks for the kimura. Starks finally works his arm out of danger with 30 seconds left and lands some punches from the top. He's going to take the round 10-9.

Round 1: Carmont walks out with welterweight champion Georges St-Pierre in his corner to make his UFC debut. Carmont takes Camozzi down inside the first minute, but Camozzi uses the wall to get back to his feet. Camozzi pushes Carmont against the cage. Carmont punches his way out of the position. Camozzi tries to bully him again, pushing him into the corner. Carmont lands a few knees to the body. Carmont pulls Camozzi down but Camozzi pops right back up. Carmont throws a knee, then a pair of elbows. He's showing some diverse offense. Relatively close round but Carmont takes it 10-9.

Round 2: Carmont lands a right hand and Camozzi moves inside to initiate the clinch against the fence. Carmont likes knees from in tight, and he's landed a few any time he has the space. Camozzi is trying hard to crowd him. Carmont lands a right hand, backing Camozzi up. A nice exchange and Carmont gets the better of it. Carmont goes for the takedown, picks up Camozzi and slams him down on his back. Carmont on top with strikes and over a minute to work. Carmont looked up at the clock, Camozzi tried to take the opportunity to get up, and Carmont dropped him with a left hook. Carmont tried to finish but Camozzi covered up. Big round for Carmont 10-9.

Round 3: Carmont lands a series of strikes early. He backed up and Camozzi audibly swore, giving the crowd a laugh. Carmont is taking over the fight with his standup. Camozzi's face has been bloodied since the second round and Carmont looks pretty much unmarked. Another Carmont takedown with two minutes left. Hammer strikes from the top until he pulls Carmont into his guard. Carmont lets him up and Camozzi comes up with a flying knee into a clinch. Time's running short. Camozzi nearly had a kimura as time ran out. Carmont 10-9.

Round 1: Left hook by Nijem to open things. Nijem flurries in with a combination, the moves in for the takedown. Downes gets back up but Nijem tags him again with right hands. Nijem scores another takedown. Downes works free for a moment before Nijem drags him down. We're up and down like musical chairs. Nijem finally takes Downes' back and looks for the rear naked choke. Downes defends that but Nijem throws strikes to free up his neck. He looks for the choke again. Downes gets free with over a minute left. He has little time to accomplish anything. Nijem takes him down again and gets right to his back. It's a very one-sided round, and it's Nijem's 10-9.

Round 2: Much better start to round two for Downes, who briefly had Nijem in an inverted triangle. Nijem got free though, and took Downes to the ground again. He immediately mounted Downes, who gave up his back. Nijem went for the rear naked choke again. Downes fought it off. Nijem looked for an Americana, Downes scrambled free. Nijem's basically having his way with him, even if he can't get the finish. He's been riding Downes' back for most of the round. Downes is surviving, but it's one-sided, 10-9.

Round 3: Nijem faked a takedown and fired off some offense that landed. Downes circled away but Nijem followed him for another takedown. The round then settles into the same thing that's come before it. Nijem in top position looking for a finish but Downes resisting. Another rear naked choke try from Nijem. With this one, he had the body triangle in and still couldn't finish. It's going the distance, and it's going to be Nijem's 10-9. Could easily be a 10-8 as well.

Round 1: Vera attacking the legs and body early with kicks. Vera then jumps into a flying knee. They clinch against the cage until Vera pushes off and they re-set in the middle. Marshall flurries with a combo, and Vera answers with a right cross before another clinch. It's a stalemate and the ref breaks them up with a minute left. Vera still attacking the legs with low kicks. Marshall tries a high kick near the final horn that misses. Vera takes a slow round 10-9.

Round 2: Pace picks up to start the second. Vera just misses on a head kick and Marshall goes low, looking for the takedown. Marshall grinds him into the fence. The two jockey for position until Vera takes him down with three minutes left. Vera to half-guard, and drops elbows from the position. Marshall gets back to his feet and Vera fires off a hard knee from the clinch. They move back to the center with 20 seconds left. Marshall connects with a left hook near the close. It's Vera's 10-9.

Round 3: Marshall staggers Vera early with a right hand. Marshall then drops him with a right. Vera is in trouble as Marshall throws blows from the top. Vera covers up and gets to his feet. Marshall lands another hard left hand before Vera can initiate a clinch and give himself recovery time. Vera is just holding him against the cage, and it takes Marshall about a minute to free himself. Marshall gets the takedown with 2:00 left. He gets Vera's back. He's throwing punches from the back. He looks for an arm bar with a beautiful transition. Vera gamely defends. Marshall tries to pull him into a triangle but Vera escapes and throws punches from the top. It's Marshall's round 10-9.