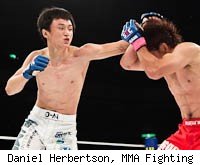 In the second main event, relatively unknown Korean prospect Doo Ho Choi thoroughly trounced stiff opposition in former Deep lightweight champion Nobuhiro Obiya. Choi, who aside from an undercard bout in Sengoku has only featured in much smaller events, destroyed the legs and face of Obiya with laser guided strikes before finishing the fight with a flying knee only 15 seconds into the final round. Choi came into the bout as a late replacement for the injured Won Sik Park but turned in one of the most impressive performances of the year in Japan.

Former Deep lightweight champion Katsunori Kikuno got back on the winner's list after recently losing his strap to Mizuto Hirota, but he has still not learned from past mistakes. The karate-stylist once again employed his no-defense counter punch style, continuing to abandon the hourglass karate stance and crescent kick that brought him so much success in DREAM and Deep.

The finish came for Kikuno late in the first, landing three beautiful counter reverse punches to drop an over-matched Kwang Hee Lee, but by the end of the short bout, Kikuno was badly cut above the eye and had taken a plethora of heavy blows cleanly on the jaw. Kikuno should have easily handled his foe but his choice to employ this simply insane style made things much more difficult for him. Desipte the the win, one of Japan's brightest stars continues to fade and it is hard to see Kikuno reaching the upper echelons again while fighting like this.

We knew that Korean featherweight Doo Ho Choi was good, we just didn't realize how good. Up until this point Nobuhiro Obiya had proven impossible to finish with even Gilbert Melendez and Katsunori Kikuno unable to put the hardy slugger away.

Choi absolutely decimated the former lightweight kingpin though, the entire audience wincing in sympathy with every cutting low kick, perfectly placed punch and finally the fight-ending flying knee. The entirely one sided 10-minute and 15-second affair certainly ranks among the most impressive performances of the year in Japanese MMA.

UFC and Pride veteran Ryo Chonan battled through exhaustion to take a hard-fought decision over kickboxing convert Naoki Samukawa. Chonan dominated proceedings early, using his significant cage experience to pin the J-Network, M-1 and WKO champion down and batter him with elbows and soccer kicks. Samakawa became more accustomed to the cage in the second, avoiding significant damage and in the final period, traded blows with a spent Chonan to take the round. Samukawa's efforts to sway the judges came too late however and all three judges ruled in favor of Chonan.

The bout got off to an unfortunate start, but former Sengoku star and former Deep ace Kazunori Yokota brought the highlight ending as he pounded and soccer kicked Katsuya Toida into a corner stoppage only 25 seconds into the second round.

Only 10 seconds into the featherweight contest Yokota landed a brutal kick below the belt, Toida taking a full five minutes to recover before the bout was restarted. After receiving a yellow card for his misplaced kick, Yokota wasted no time, chasing Toida with strikes and at one point coming close with a surprising kimura. In the second stanza, Yokota turned up the heat, dropping the grappler with a punch and then finnishing the tob with a torrent of punches and a soccer kick.

In the first period, Nakamura and Kim proved to relatively even on the canvas, Nakamura having an advantage but Kim being good enough to avoid armbar, toe hold and knee bar attempts. Nakamura dramatically swung the bout in his favor in the second though, grinding Kim's face up with his jab and right straights. With Kim a bloody mess going in to the final round, Nakamura had a much easier time securing the fight-ending armbar.

Earlier in the evening, Amanda Lucas, daughter of Star Wars creator George Lucas, picked up her second win in Deep for the year, submitting an over-matched Hari with a rear naked choke late in round one. Despite her relative lack of experience in MMA, Lucas is bringing plenty of attention to Deep in Japan, earlier this month featuring on a prime time comedy show where she grappled with comedians.