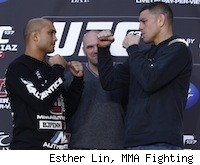 LAS VEGAS -- What was once Nick Diaz's can be his again.

The chance to fight for the UFC welterweight championship is likely just one win away, and standing between him and that goal is BJ Penn. Oh, it's only a legend and Diaz's first MMA hero. Even if you're not a fan of subtext, the significance of that one final obstacle hard to miss.

At 32 years old and over a decade into the game, Penn is still no easy out. Earlier this year, he faced Jon Fitch, who is considered by many to be the No. 2 welterweight in the world, and fought him to a draw. So a win by Diaz over Penn may serve to increase his name value among those who didn't follow him in his Elite XC and Strikeforce days. It would nearly certainly increase interest in a potential Diaz vs. Georges St-Pierre welterweight title fight.

When you look at Penn and Diaz, the first thing you notice is the size differential. This isn't unusual for Penn when he competes as a welterweight, but it's nonetheless important. Diaz is naturally heavier, taller and has greater reach. That's a lot to overcome in a fight that is likely to be heavy on standup.

Historically, Penn (16-7-2) makes it up with his fearlessness and accuracy. Penn has been lauded as possibly the best boxer in MMA, and his history of success is strong evidence that statement has some substance behind it. According to FightMetric.com, Penn's landed 52 percent of his thrown strikes, while being hit by just 40 percent of his opponents'.

Diaz, though, poses some unique problems that none of Penn's recent opponents have. He's a southpaw. He has a four-inch reach advantage. He is one of the highest-volume punchers in MMA history. He has unending stamina. And he's not scared, homie. Add that all together and you have one unique set of skills and confidence.

Diaz (25-7, 1 no contest) works his entire offense off his jab. It is usually a pawing punch that he flicks out repeatedly, and often with no sting behind it. Because of that, Diaz is often mischaracterized as having a "pitter-patter" style. But the jab is actually multi-functional in its use. First, it allows Diaz to control the range. That tends to make him the aggressor and makes him offensive and his opponent reactionary. Second, it forces his opponent off his game. When you're constantly reacting instead of acting, you're not the one creating angles, and success is harder to come by. Third, it sets up what is to come. Diaz doesn't get credit for his power, but he's consistently hurt bigtime strikers who finally tire of working over his jab and wade in too close, too quickly.

What has made Diaz murderous for most of the rest of the world's welterweights is that although he's quite skilled on his feet, the alternative is hardly a better option. If you decide to put Diaz on his back, it's quite possible you'll end up tied in a knot, forced to tap out to the Gracie jiu-jitsu black belt.

Given Penn's background and pedigree, that would be an unlikely and even shocking finish. Penn has never been forced to tap in his lengthy MMA career, and given his proficiency in jiu-jitsu, he probably never will.

There is only one area of this fight where one man has a sizable edge on the other, and that's wrestling. Penn has historically done well in the department, successfully landing 59 percent of his takedown tries while defending on 77 percent of tries against him.

Meanwhile, Diaz is successful on only 33 percent of takedown tries, and defends 63 percent of tries against him.

Given that disparity, it will be interesting to see if Penn decides to employ wrestling in his game plan. In the past, it's been a bit hit-or-miss for him in that part of the game. Against Fitch, for example, he hit on two of three takedowns. But go back just a few fights into his recent history, for example his first fight with Frankie Edgar, and he didn't try a single takedown in a 25-minute fight. It's an edge worth exploiting, but Penn wouldn't tip his hand on whether it's one he planned to use.

If Penn decides to mix it up with his wrestling, it could even benefit him in the standup department, because it will give Diaz something else to look for. But if he decides to stand in the cage and strike with Diaz, it allows Diaz the chance to set the pace that favors him.

Especially in a fight where a finish seems unlikely, you have to think about who's more likely to win rounds. Penn might have superior hand speed, but Diaz's volume scores consistent points. I think Penn might sprinkle in a takedown or two, but he's not likely to do it enough to disrupt Diaz's offensive volume.

The other thing is Penn will have to keep with Diaz for 15 minutes. Penn might very well win the first round, but Diaz pushes fighters like no one else. He stays fresher longer than anyone else. So for Penn, it will be harder to win the second, and even harder to win the third.

I think Penn takes round one but Diaz rallies back and takes the final two on points. Nick Diaz wants his shot at the belt. A win over Penn will set him up for a big money match against the champ. Diaz by decision.