Nine Ways of Looking at UFC 137 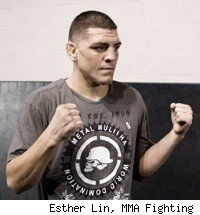 Questions, concerns, comments, and even a little statistical analysis, sort of: UFC 137 gives us a chance to sort through it all, in no particular order. I don't know about you, but to me it sounds like a perfect way to while away the hours on a Friday.

I. Has Nick Diaz ever been happy or content with any situation, ever? I don't want to call the guy a complainer, but...no, he's a complainer. It's always something with Diaz. Either he's not making enough money or he's being forced into a fight he doesn't want or he wishes he'd taken that boxing contract instead. It makes you wonder, has he ever felt like he got what he wanted in this business -- in this life! -- even once? Most fighters I know go to great lengths to avoid negative thinking, but Diaz seems to thrive on it. It's almost as if the thing motivating him to work so hard in the gym is his belief that the deck is stacked against him. As if he has to be better than everyone else, because the world wants to see him fail. In reality, it's the other way around. Plenty of people want to see Diaz succeed. That's why they keep giving him one opportunity after another, even when he torches olive branches as quickly as they are extended. But hey, whatever works. If, in order to succeed, Diaz needs to feel like he is constantly mired in misery thanks to a universe looking to cheat and crush him at every turn, then so be it. You'd just like to see the guy enjoying the ride a little more while he's on it, because it won't last forever.

II. Age difference, in months, between Mirko Filipovic and Roy Nelson: 27. Believe it or not, "Cro Cop" is just a shade over two years older than Nelson, though you'd swear he had a decade on him. In fighter years, maybe he does. In addition to his kickboxing career, Filipovic is a veteran of nearly 40 pro MMA bouts, while Nelson has about half that many. Nelson also benefitted from fighting the Bo Cantrells and Vince Luceros of the world early in his career, while Cro Cop came up in the Pride heavyweight division back when it was stocked with household names. Still, when you think about this fight it seems like a contest between the old school and the (at least somewhat) new. It doesn't seem like a fight between two dudes who could have, theoretically at least, played on the same high school basketball team.

III. How much did his knockout of Pat Barry really help Cheick Kongo's confidence? Without a doubt, it was one of the greatest comebacks in MMA history, but did you see his face afterward? He looked like a man who had just woken up from a terrible nightmare, and while relieved to find out it wasn't real, was still not totally convinced that there were no monsters under the bed. That's as close as you can come to getting knocked out and still win. It makes for an exciting finish, but it's the kind of excitement most fighters would like to avoid. When you get close enough to the edge to feel your wheels slipping, the temptation to slow down and play it safe after that can sometimes be overwhelming.

IV. Maybe, whether he knows it or not, Nick Diaz is exactly what B.J. Penn needs right now. The last time we saw a truly terrifying Penn was when he got into the cage against Matt Hughes for the third time, muttering to himself like a crazy man at the bus stop. Jon Fitch failed to elicit such a reaction in him (or in UFC fans generally), but how about Diaz, who usually has some choice words for his opponent's mother once the fight gets started? At this point in his career, maybe Penn needs an opponent who will throw his hands in the air like he just doesn't care and taunt his family like they're from separate clans of feuding hill people. If that doesn't help Penn find the old fire, nothing will.

V. Dennis Siver vs. Donald Cerrone could be the best Spike TV prelim fight in ages, and just when the UFC needs it the most. The Pettis-Stephens and Maia-Santiago bouts on the UFC 136 prelims probably didn't sell many pay-per-views. In fact, they might have even convinced some fans to turn off the TV and go see a movie instead. But the Siver-Cerrone fight looks like a can't-miss scrap, at least on paper, and this card could sure use the boost. Siver's won four straight, while Cerrone's notched five in a row. They both like to stand and mix it up, and Siver's Russo-German stoicism is perhaps the best counterweight to Cerrone's swaggering redneck routine. If this fight turns out to be even half as good as I'm expecting, it won't even matter that the night's other televised prelim -- Tyson Griffin vs. Bart Palaszewski -- seems like the perfect opportunity to get up and prepare some snacks.

VI. Combined record of UFC 137's curtain-jerking newcomers: 13-0. Neither Dustin Jacoby nor Clifford Starks has lost a professional MMA bout as of yet. Just be advised that, when it comes to guys coming up off local shows, not all undefeated records are created equally.

VII. Now that Jeff Curran is finally here, where can he go? It took a long time for the "Big Frog" to finally make his UFC debut. But look around at the UFC's bantamweight division right now and you'll see a list of guys who already hold wins over him. Joe Benavidez, Takeya Mizugaki, Urijah Faber, "Kid" Yamamoto -- it's almost as if beating Curran is a condition of getting your UFC bantamweight merit badge. I don't mean to be hard on Curran, who's a great guy and a legend of the sport, but it does make me think that maybe this chance has come too late in his career. Going up against a grinder like Scott Jorgensen, that doesn't help matters much.

VIII. It's not hard to see what the UFC brass is thinking with the Brandon Vera-Eliot Marshall match-up. They cut Vera and more or less had to bring back when it was revealed that the last man to beat him was, in Vera's words, a "juice monkey." Marshall got cut and then brought back when they needed a warm body to throw in against Luiz Cane on short notice, and his willingness to be that body earned him the tiniest bit of slack, resulting in this fight. The UFC doesn't seem interested in keeping both of them around for long, so why not make them fight each other for the last spot on the lifeboat? The winner gets to stick around and survive on rain water and fish guts, hoping for an unlikely rescue. The loser gets thrown overboard, but at least he knows where he stands...or doesn't. You have to admit, there's a certain cruel, yet satisfying economy to it all.

IX. Can Hatsu Hioki avoid the fate of other Japanese transplants to the UFC? One after another, they've come on a wave of hype only to dissipate quickly on rocky shores. From Takanori Gomi to "Kid" Yamamoto, several Japanese fighters have arrived only to appear as if they were much better when we were viewing them from across the Pacific. The big difference is that Hioki seems much closer to his prime, and sure, a UFC debut against George Roop isn't exactly the same as one against Kenny Florian. It's a slightly gentler introduction to life in the UFC than the one some of his countrymen have received. If Hioki can't make the most of it, things aren't likely to get much easier from here on out.