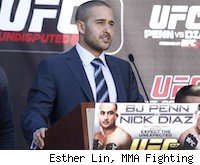 LAS VEGAS -- For years, Joe Rogan and Mike Goldberg have been the UFC's official broadcast pairing, but with the promotion's growth and exploding events schedule, they will no longer be the only ones.

On Thursday, the promotion announced that they have signed ESPN's Jon Anik to a deal to make him a part of the company's upcoming schedule of shows on FOX networks.

The UFC recently signed a seven-year deal with FOX, and White said Anik would be the play-by-play man for events that air on FX, and he'll also have a to-be-determined role on the upcoming, revamped Ultimate Fighter.

There has been no decision on Anik's broadcast partner, though according to White, a search is underway.

"Believe me when I tell you, our schedule over the next couple years, Jon's going to be very busy here in the UFC," White said. "He's going to wish he was still on ESPN."

Anik, who has been the host of ESPN's "MMA Live" show since its inception in 2008, said it was an opportunity he couldn't pass up.

"This is where I wanted to be," he said. "If I was leaving ESPN, there was one destination, it was the Ultimate Fighting Championship. It's a dream come true."

Anik is expected to host one more edition of "MMA Live" before he begins his new role with the UFC.