Mirko Cro Cop: Win or Lose, Saturday Could Be My Last Fight 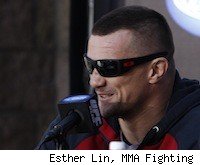 LAS VEGAS -- The outcome on Saturday might be irrelevant. To Mirko "Cro Cop" Filipovic, his UFC 137 fight against Roy Nelson might be his last either way.

The 37-year-old Cro Cop has entertained the possibility of retirement after each of his most recent losses, but this marks the first time he's talked about it even before a match took place. With the realization that time is running short on his career, the Croatian striker voiced his strongest hint that he may be taking the long walk to the octagon for the final time.

"I wish you could see the new Cro Cop, 15 years younger," he said. "I wish it's possible, but unfortunately I'm 37 and this could easily be my last fight in the UFC. It has nothing to do with the result, if I win or lose. Especially if I lose, but even if I win it could be my last fight in the UFC. And I'll really give my best and hope this will be an attractive fight. I cannot afford anymore, especially in this fight, that it's declared as the most boring fight of the evening like the fight with Frank Mir. I think me and Roy will perform a good fight and the fans will be satisfied and excited."

Cro Cop, who most recently fought and lost in March, said that he underwent a rigorous six-month training camp to prepare himself, but acknowledged that at some point, every fighter must ask himself if he can continue on, and answer honestly.

He also voiced regret over his UFC difficulties. Outside of the promotion, Cro Cop has a sterling record of 23-4-2 with one no contest. But in nine fights for the organization, he's gone just 4-5, a record that clearly didn't sit well with him.

With his past behind him though, Cro Cop said he is prepared for the fight, and is freed by the thought that he has little to lose. Even if he falls in defeat and retires, he has something to look forward to: more time with his two sons.

After an early career in kickboxing, Cro Cop transitioned into martial arts in the early 2000s. Within two years of the switch, he was already considered among the best heavyweights in the world. His August 2005 PRIDE match with Fedor Emelianenko was one of the most anticipated non-UFC title matches in history, and although Emelianenko ultimately emerged victorious, Cro Cop remained considered one of the best heavyweights in the sport for years before finally signing with the UFC.

His last win came at UFC 115, when he defeated Pat Barry with a third-round rear naked choke submission.