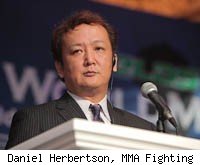 It's the news we all knew was coming - Fighting and Entertainment Group announced to the media on Thursday that it is postponing the K-1 World GP Final 16 which was initially scheduled for Oct. 29 in Nanjing, China.

The postponement, which comes only two days before the original event date, was due to "visa issues and other problems" according to the FEG release. The official reason for the postponement is rather weak given that IT'S SHOWTIME president Simon Rutz declared K-1 promoter FEG "technically bankrupt" in a tell-all press release earlier this month. FEG is yet to address Rutz's comments.

Additionally, the word "postpone" is quite optimistic as sources indicate that there will be no chance of a K-1 World GP Final 16 this year. Significant progress has been made towards revitalizing the K-1 brand though with details regarding the possible sale of the world's leading kickboxing promotion likely to be announced next week. Although the K-1 World GP Final 16 will not be taking place in 2011, it is still possible that one event be held in mid-December.

As of Thursday evening, the K-1 website is yet to announce the postponement or acknowledge financial issues, currently only saying that changes are being made regarding ticketing.

Although FEG is yet to publicly admit any of the recent problems within K-1, fighters continue to flock from the promotion. Reigning K-1 heavyweight champion Kyotaro returned his belt earlier this week, announcing that he is leaving K-1 for the boxing ring, partially due to unpaid fight purses. Alistiar Overeem, Badr Hari, Tyrone Spong and Gokhan Saki have also left kickboxing or are possibly planing to leave soon. Jerome Le Banner, Ray Sefo, Peter Aerts and others have also been working the pro-wrestling scene in Japan.

K-1 legend Ray Sefo and HDNet Fights commentator Michael Schiavello have estimated that FEG owe fighters an astounding $10,000,000. In an interview with the Japanese media, Sefo stated that he alone is owed $700,000.

In an attempt to clear some of the debts, FEG reportedly offered some fighters positions in K-1 World GP Final 16 in exchange for waiving half the money that the promoter owed. It is not known who received these offers or what effect it will have on the fighters now that the 2011 K-1 World GP is officially postponed and most likely cancelled entirely.