Diego Brandao's Strategy: 'Hit Your Face and Knock Your Ass Out' 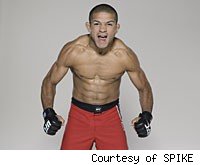 Wednesday night's episode of The Ultimate Fighter featured Diego Brandao's featherweight fight with Steven Siler, and it didn't last long. Brandao flew across the cage, attacked Siler and finished him off with a first-round TKO for one of the most impressive performances on this year's show.

MMAFighting.com caught up with Brandao to talk about that fight, and specifically why he decided to go on the attack from the opening bell against Siler, rather than follow the game plan set forth by his coach, Michael Bisping.

Michael David Smith: You came flying across the cage at the start of the fight. Why did you start so fast? Isn't there a risk of being too reckless?
No. I just believed in myself. I've never been afraid of getting knocked out -- I'm not too worried about that.

Your coach, Michael Bisping, said the game plan was not to do anything crazy. I guess you're not afraid to do something crazy.
No, I think the plan is to fight. I'm going to f--king kick your head off. That's my plan. I'm going to hit your face and knock your ass out.

But there is some strategy to MMA, right?
My strategy was that I thought he would shoot for a takedown at the beginning and I thought a flying knee would hit his face, so that's why that was my strategy.

Bisping said your cardio isn't good. Is that true, and is that why you wanted to finish the fight quickly?
No, I wouldn't say so. I think the way he trained was different than what I'm used to with Greg Jackson and Mike Winkeljohn and that might have worn me out and made him think I didn't have cardio, plus I felt a lot of pressure about making weight. The UFC offered us all the food we wanted, which is crazy. When I was growing up in Brazil, I never had a lot of food in my house, and I just wasn't used to being able to eat all I wanted. So it was a little weird for me to be in a house that had all that food. That's the only reason making weight was a concern.

You talked a little bit on the show about your father telling you to take care of the family before he died. Is that what motivates you to make it in the UFC?
That's why I'm fighting. When my dad passed away at first, I was fighting in the streets a lot and it was actually Ronaldo Jacare who told me I should be fighting in MMA and made me start training jiu jitsu. Jacare is a great friend, and he has trained me in Brazil and helped me a lot. I feel great and very happy that I won my first fight, and I'm especially happy because my dad, who passed away, would be very proud of me, and my mom is very proud of me. I fight to support my family.