Brazil Will Get First International Edition of The Ultimate Fighter, Likely to Air on FUEL 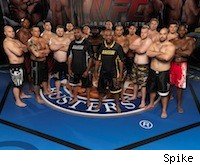 LAS VEGAS -- The UFC has finally, officially signed a deal to produce its first international edition of The Ultimate Fighter.

And despite UFC president Dana White's past statements that it would probably take place in either Canada or The Philippines, it will instead take place in Brazil.

"It's a done deal," White said on Thursday afternoon.

White said the UFC had signed a deal to produce and air the series in Brazil, though he did not yet know exactly where it would take place. But the series is also likely to air in the U.S. Under the promotion's new FOX deal, White said there are ongoing discussions, and that the show is likely to air on FUEL.

"Let me tell you what, if you're a UFC fan, you want FUEL," he said. "FUEL's going to be loaded with all kinds of UFC programming including live fights, and live fights from other countries."

The UFC just recently visited Brazil for the first time during the Zuffa era, in a massively successful show. Given MMA's roots in the country, the market has grown quickly and become a hot target for the UFC, which is seriously exploring a return within the next few months. The TUF deal shows how serious they are about continuing to grow the sport in Brazil.

But if you're in The Philippines or Canada, have no fear. TUF is likely coming to those markets and others, in due time.

"We're doing all those, too," he said. "This one just happened really fast."