All UFC on FOX Fights Before Title Bout Will Air on Facebook, FOX.com 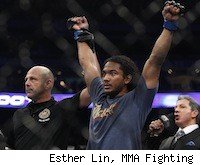 LAS VEGAS -- One fight on the UFC's debut outing on network television is likely to be the most watched fight in North American TV history. The others going on that same night though won't even find their way on to television.

UFC president Dana White on Thursday said that every fight under the main event heavyweight title match will air on Facebook and FOX.com.

That means that even the possible No. 1 contenders fight pitting Ben Henderson and Clay Guida won't find its way on to TV. White said that the promotion considered putting the fights on ION, but ultimately decided against it.

"The way that we looked at this thing as we sat down and figured it out, it just made sense to do this fight on FOX and put the prelims on the internet," he said.

The UFC's deal with FOX doesn't officially kick in until January 2012, but the November 12 event will function as an introduction to the UFC, as a big audience is expected to tune in and watch heavyweight champ Cain Velasquez attempt to defend his crown against Junior dos Santos. The one-hour special begins at 9 pm ET.

Meanwhile, because the UFC's current deal with Spike has yet to expire, they can not air fights on a competing cable network. That left few options, and while ION was considered, the UFC ultimately has chosen to put all its efforts behind the major main event. In related news, FOX will air a "UFC Primetime" on Velasquez and dos Santos this Sunday following their scheduled broadcast of NFL football.