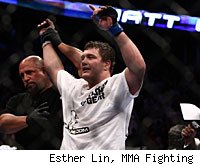 Can Nick Diaz make a triumphant return to the UFC and beat B.J. Penn? Can Matt Mitrione stay undefeated and beat Cheick Kongo? Will Mirko Cro Cop show he still has something left against Roy Nelson? Is there any reason to buy this pay-per-view now that Georges St. Pierre is off the card? We'll answer those questions and more as we predict the winners of Saturday night's UFC 137.

When: Saturday, the preliminary fights on Facebook begin at 6 PM ET, the Spike fights begin at 8 and the pay-per-view begins at 9.

BJ Penn vs. Nick Diaz
Diaz is on a 10-fight winning streak, but some critics contend that he's built up his record against weak opponents and wouldn't be able to handle the best of the best in the UFC. The fight with Penn should tell us a lot about Diaz: Can he use his high-volume but sometimes sloppy punching against a good boxer? Can he get the better of an excellent jiu jitsu player on the ground?

I've always enjoyed watching Diaz and was hoping to see him fight St. Pierre for the welterweight title, but my money is on Diaz falling short against Penn. I think Penn can jab Diaz effectively all night if the fight stays standing, and I think Penn is too sophisticated a grappler for Diaz to get him in trouble on the ground. This is not a good stylistic matchup for Diaz, and I see Penn winning by unanimous decision.
Pick: Penn

Cheick Kongo vs. Matt Mitrione
Mitrione was a former NFL defensive lineman who had little MMA experience when he was invited to join the cast of The Ultimate Fighter, but he has developed into a credible heavyweight. Kongo is a great striker and a lot of fun to watch, but he struggles against bigger, stronger opponents who can take him down, and I think that's exactly what Mitrione is going to do. I like Mitrione to win a decision and improve to 6-0.
Pick: Mitrione

Mirko Cro Cop vs. Roy Nelson
Both of these guys are on two-fight losing streaks and have looked very unimpressive lately, but the difference is that in Nelson's two losses he was simply beaten by better opponents. In Cro Cop's two losses he was not only beaten but looked like he didn't even particularly want to fight. It's sad to say but I just don't think Cro Cop has anything left at all. Look for Nelson to win, and for UFC President Dana White to face questions about whether Cro Cop is done in the UFC.
Pick: Nelson

Scott Jorgensen vs. Jeff Curran
The one good thing you can say about all the injuries that affected UFC 137 is that they created space for Jorgensen vs. Curran on the main card. This fight should be a lot of fun, featuring one of the best bantamweights in the world in Jorgensen, against one of the pioneers of the lower weight classes in Curran. I'd love to see Curran go on a run in the UFC, but he's 34 years old and has been fighting for 13 years and I think he's slowed down considerably. I think Jorgensen wins this one handily.
Pick: Jorgensen

Hatsu Hioki vs. George Roop
Hioki has been the best featherweight in Japan the last few years and is an exciting addition to the UFC's featherweight division. He has great reach and knows how to take advantage of it on his feet, and he's very aggressive off his back on the ground. And yet ... after seeing so many fighters have success in Japan only to struggle when they move to the Octagon, I'm having a hard time seeing Hioki beating a solid UFC veteran like Roop. I think this fight goes the distance and Roop takes the decision.
Pick: Roop