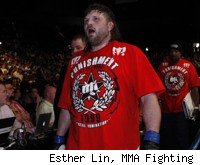 The main event for UFC 137 may have seen its share of tweaking, but it's not the only fight on this card with high stakes. Several fighters on Saturday night's lineup could be just one loss away from unemployment, and one or two could even be facing retirement if they can't pull out a win.

Who are they, and what are their chances for crafting a brighter future for themselves in Las Vegas this weekend? For answers, we turn to the Cut List.

Roy Nelson (15-6, 2-2 UFC)
Who he's facing: Mirko Filipovic
Why he's in danger: "Big Country" has lost two straight, and while he might have a very valid reason for looking like a man about to die from exhaustion in his last fight, it still didn't make a great impression on his employers. You factor in his occasionally obstinate independent streak, not to mention a physique that, rightly or wrongly, the UFC would probably rather not try to present to the world as that of a world-class MMA fighter, and you might be looking at a man that the organization wouldn't mind doing without. In the plus category, Nelson has a solid fan following, in part because of the very same idiosyncrasies that might make him unappealing at times to the UFC. He's also a name-brand heavyweight, and the UFC needs all of those that it can get. The infusion of the Strikeforce big men will certainly help bolster the division, but the UFC might still be reluctant to cast off too many heavies while there's still value left in them.
Chances of getting cut: Unlikely. The best thing Nelson has going for him here is the likelihood that he'll win this fight. Oddsmakers have him as a nearly 3-1 favorite. As long as he's healthy and focused, he should beat Cro Cop and solidify his employment situation.

Mirko "Cro Cop" Filipovic (27-9-2 [1 NC], 4-5 UFC)
Who he's facing: Roy Nelson
Why he's in danger: Like Nelson, Cro Cop has lost two in a row. He's also at the end of his current UFC contract, and Dana White has implied that he's only giving Filipovic this fight because he owes it to him. Even if he gets the upset victory, it's far from guaranteed that the UFC would see enough of a future in the 37-year-old Croat to sign him to a new contract. If he loses, well, he's already said that he'll not only leave the UFC, but also apologize to its fans and its front office for failing to "justify the treatment" he's received. It's enough to make you wonder, under what circumstances would this not be Filipovic's final fight in the UFC? Even if he kicks Nelson's head into the third row, the best possible outcome might be Cro Cop calling it quits anyway and going out on a high note. Then again, rarely does one come across an aging MMA legend who doesn't interpret a victory as a sure sign that he should keep fighting indefinitely.
Chances of getting cut: Very good. But don't think of it as a cut. Think of it as the natural (even necessary) end of something that we all knew couldn't last forever. His stay in the UFC has been unspectacular, and his status as a legend is already established. No need to prolong this any further.

Tyson Griffin (15-5, 8-5 UFC)
Who he's facing: Bart Palaszewski
Why he's in danger: Griffin hit the dreaded three-fight skid recently, but managed to save himself by dropping down to featherweight and notching a decision win over Manny Gamburyan back in June. It was enough to grant him a temporary stay, but just barely. Now, facing another WEC transplant, he needs to show he can do more than just get by. The UFC might need featherweights to bolster the relatively thin (ha!) division, but it doesn't need 145-pounders who can wrestle just well enough to win close, forgettable decisions. Griffin hasn't had an impressive performance since he knocked out Hermes Franca over two years ago. If he wants a future in the UFC, he needs to show that he can not only get his hand raised, but entertain a few people along the way.
Chances of getting cut: Decent. If he loses this fight (oddsmakers doubt he will), he's almost certainly gone. Fortunately, Palaszewski is weak in all the places where Griffin is strong. If he gets this one to the mat and keeps it there, Griffin will probably stick around for at least a little while longer.

Eliot Marshall (10-3, 3-2 UFC)
Who he's facing: Brandon Vera
Why he's in danger: It's no secret that UFC officials aren't big fans of Marshall's fighting style. If they were, they probably wouldn't have cut him after a 3-1 stint the first time around. He got back in the fold mostly by volunteering for a short-notice fight against Luiz Cane, which he lost swiftly and thoroughly, but which still earned him the chance to show the UFC what he could do with proper notice and time to prepare. If Marshall loses here, it's almost guaranteed that he'll get dropped again. If that happens, he says, he'll hang up the gloves and call if a career. If that doesn't give him the necessary sense of desperation to go out and lay it all on the line here, nothing will. Of course, Vera's looking at a similar situation, yet is a 5-1 favorite to knock Marshall right into retirement.
Chances of getting cut: Very good. It's hard to see how Marshall beats Vera. Perhaps a compelling fight would be enough to keep him around even in defeat, but don't bet on it.

Brandon Vera (11-5 [1 NC], 7-5 [1 NC] UFC)
Who he's facing: Eliot Marshall
Why he's in danger: Vera also knows what it's like to feel the sting of the UFC axe. If not for Thiago Silva's non-human urine sample, he'd still be out of a job. But fair is fair, and the UFC rightly realized it couldn't send a guy packing for losing to a juiced-up opponent, so "The Truth" gets one more chance to get it right. Both Vera and trainer Lloyd Irvin say he's a different man in the gym now that he's rediscovered his passion and motivation, but we've heard that before. The real test is whether he can perform in the cage under such tremendous pressure. The good news for Vera is that Marshall is a very, very beatable opponent. He probably doesn't have the power or the wrestling chops to make it a ground fight for very long, and on the feet he's in serious trouble. Or at least, he will be if Vera decides to use all his tools consistently and aggressively. We haven't seen that in some time, but he has to know it's now or never.
Chances of getting cut: Unlikely. This is Vera's fight to lose, and I doubt he will. Even if he performs at a fraction of his abilities, it's probably enough to beat Marshall. It just won't be enough to stick around for very long after that.