Andreas Kraniotakes Out of ProElite 2 Main Event Against Tim Slyvia 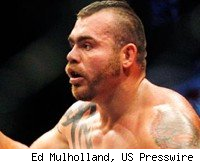 Just 10 days after main event heavyweight Pedro Rizzo had to pull out of his fight against former UFC heavyweight champion Tim Sylvia with an injury, Rizzo's replacement, Andreas Kraniotakes, now also is off the card.

Sources close to ProElite on Wednesday told MMA Fighting that Kraniotakes' fighter license was not approved by the Illinois State Professional Athletic Commission, which oversees MMA in the state. That leaves ProElite scrambling for a replacement to fight Sylvia on what will be less than 10 days notice for ProElite 2 at the iWireless Center in Moline, Ill., on Nov. 5.

According to sources close to the event, the reason behind the state commission's refusal to approve Kraniotakes stems from a lack of sanctioned fights on his record. Though the German heavyweight is 12-4, the bulk of his 16 career fights have come in Europe, leaving him without any sanctioned fights in the United States for the commission to base its decision on.

ProElite is said to have a replacement fighter lined up to face Sylvia, and attempted to present that fighter to the Illinois commission on Wednesday – only to find the board had closed up shop for the business day. A decision on Sylvia's new opponent is expected Thursday, which will give him nine days to prepare for the fight – and Slyvia nine days to prepare for what will be his third opponent since signing on for the event.

Early Thursday morning, Kraniotakes posted a video with his reaction to the cancelation on his official website.

Kraniotakes, who had come to the States to train in San Diego leading up to the fight, said he is unsure what his next move will be, but he'd like to get a fight in 2011.

"I thought this was the moment in my career where all the suffering and the hard stuff I've put into it, all the training and all the work, finally paid off," Kraniotakes said. "And now I stand here and don't really know what to think. It's kind of tough for me. I don't really know where to go from here, but I know this eon't hold me down."

ProElite has not yet announced its third event, though it is not likely to take place this calendar year. Its first event since folding up shop in late 2008 took place in August in Hawaii, and a return to the Aloha State would seem possible – and may prove to be an easier road to getting Kraniotakes a license than in Illinois, a state commission that has not been without trouble in the past.

In March, the Chicago Tribune reported that the commission's No. 2 official was put on administrative leave so the state could investigate complaints he used his position to benefit, in part, political campaigns run by his wife and his brother's work as a boxing judge.

Last month, MMA Fighting was first to report Sylvia in the main event of ProElite 2 against Rizzo on a card that was moved to the Quad Cities area of western Illinois from its original planned home in Atlantic City. Sylvia, a Maine native, has lived in the Quad Cities for years, training with the Pat Miletich team during his UFC run as heavyweight champion.

But just 10 days ago, Rizzo had to pull out of the fight with an injury and Kraniotakes was tapped as his replacement. Though Kraniotakes is largely unknown outside of Europe, he is ranked in the Top 100 of some MMA heavyweight lists.

Slyvia (29-7) has won five of his last six. In August, he beat Patrick Barrentine (9-6) on a show in Rockford, Ill., a fight which was approved by the Illinois commission.