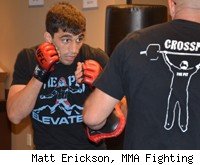 For young fighters trying to make their names through the UFC's "Ultimate Fighter" series, it doesn't get more pressure-filled than the TUF finals.

Ramsey Nijem experienced the pressure first-hand in June at the TUF 13 Finale against Tony Ferguson. But it wasn't the pressure that led to his loss.

Nijem told host Ariel Helwani on Monday's edition of "The MMA Hour" that it was his pride that got in the way, and that, along with a Ferguson left, saw his dream of being a TUF champion go out the window.

"It wasn't nerves as much as my pride got to me a little bit," Nijem said of his knockout loss to Ferguson. "Tony's a really good striker, hits hard and has good head movement. People said, 'You'll get knocked out if you stand with him,' and the critics were right on that. I just learned from that to play to my strengths and not play to their strengths."

More Coverage: Watch UFC 137 Live Online | UFC 137 Fight Card | UFC 137 Results
Nijem (4-2, 0-1 UFC), who trains at The Pit Elevated camp in Utah along with TUF 11 champ Court McGee, made his reputation in the TUF house as a fun-loving competitor who would go to just about any length for a laugh – including disrobing, leading to his "Stripper Ramsey" nickname catching on. He said bringing a relaxed attitude to his fight game should help him get back in the win column – but if it doesn't, he can live with it.

"I'm a much better fighter when I'm just out there having fun," Nijem said. "As long as I'm just out there for the right reasons, I'll be successful and won't have any regrets after the fight. If I execute my game plan and still lose and have fun, that's all I can expect out of myself."

Nijem fought at welterweight on Season 13 of TUF, but for his UFC 137 fight Saturday against Danny Downes (8-2, 0-1 UFC), he drops back to lightweight. It's a weight he believes will be beneficial to him because of his size.

The Palestinian-American fighter, who wrestled collegiately at Utah Valley University, said 155 will be a tough cut for him, but one he thinks will pay off. He fought at lightweight once before moving to welterweight for a shot at the UFC in the spring during his TUF season.

"I was fighting at '55 before I went on the show, kind of bouncing around between (lightweight and welterweight)," Nijem said. "I just feel my size can make up for my lack of experience in the ring. '55's a pretty big cut for me. If I was on the show at '55 the season before, I don't think I would've performed as well. '70 was a good opportunity for the show, and be able to drop back down to '55 after."

Against Downes, Nijem faces an opponent also in search of his first UFC win. The Duke Roufus-trained fighter lost a unanimous decision to Jeremy Stephens at the TUF 13 Finale in June after going 1-1 in the WEC before the merger.

Nijem said he knew from seeing Downes' fight against Stephens that he might be hard to finish, but believes his skill set can top Downes'.

"Danny is a tough opponent – he's the kind of person you can never count out," Nijem said "He's in shape, he hits hard and he's there to fight. He's not easy to finish. But I feel I'm a better fighter, more explosive, more athletic and I'll be bigger the day of the fight. I'm obviously the better wrestler and grappler. This is a winnable fight for me, but Danny's tough and I'm ... getting ready for a three-round grind."

Nijem and Downes fight on the preliminary card of UFC 137 on Saturday at the Mandalay Bay Events Center in Las Vegas. Their lightweight fight will be one of four prelims that will stream live on the UFC's Facebook fan page.