ONE FC Announces Three Events in Three Countries for Early 2012 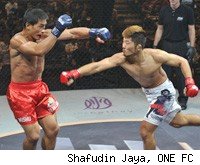 After an impressive first showing back in early September the self-proclaimed "Asian major leagues", ONE FC, has been dormant. The upstart Singapore-based promotion broke their silence on Monday evening however, announcing an ambitious schedule of three events in three countries over three months for early 2012.

Jakarta will host Indonesia's first large-scale MMA event on Feb. 11, 2012 as ONE FC heads to the 4000-capacity Kelapa Gading Sports Mall. On Mar. 31 the promotion will return to the home of the debut ONE FC event in September: the 12,000-capacity Singapore Indoor Stadium in Singapore. Finally, ONE FC will also host Malaysia's first large-scale MMA event on Apr. 27 as the promotion heads to the 10,000-capacity Stadium Negara in Kuala Lumpur.
Although no bouts have been announced for the upcoming events, the promotion is expected to announce a number of new signings in the coming week. ONE FC has been publicly quiet since their debut event on Sept. 3 but behind the scenes the young promotion has been hastily forming alliances across the continent - recently forging relationships with South Korea's Road FC, the Philippines' Ultimate Reality Combat Championship and Thailand's Dare FC.

Although no broadcast details have been announced, the upcoming ONE FC events are expected to air on ESPN Star Sports in Asia and via an online stream.