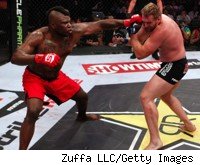 Brett Rogers' personal life appears to be even more troubled than his mixed martial arts career.

Rogers, the former Strikeforce and EliteXC heavyweight who participated in two of the most-watched fights in the history of the sport, was arrested again on Monday morning, this time for failing to comply with the conditions of his pre-sentencing release, stemming from a guilty plea last month to assaulting his wife in June.

Apple Valley Patch reports that Rogers was arrested at 6 a.m. Monday. He was scheduled to be sentenced on November 30 after pleading guilty to the assault of his wife, whom he reportedly punched and choked. It is not clear how Monday's arrest will affect his upcoming sentencing.

Rogers' attorney told HDNet's Inside MMA that Rogers surrendered to authorities on Monday morning. He stands accused of violating an order not to have any contact with his wife.

Rogers was involved in the first mixed martial arts fight ever to be shown on network television when he knocked out Jon Murphy on May 31, 2008. He was also in the main event of a CBS-televised Strikeforce show, losing to Fedor Emelianenko on November 7, 2009.

But while Rogers once possessed an 11-0 record, with all 11 wins coming by knockout, his career has gone into free fall over the last couple of years. Strikeforce parent company Zuffa released Rogers from his contract after his June arrest, and Rogers has lost four of his last five fights.

Rogers faces a maximum sentence of five years in prison.