After Considering Retirement, Kenny Florian Will Return to UFC as Lightweight 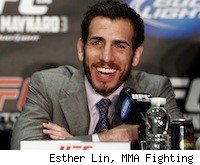 Kenny Florian is not ready to call it quits just yet.

In the hours immediately after losing a UFC featherweight championship to Jose Aldo two weeks ago, Florian wouldn't commit to any future plans, but now it appears his decision has been made, and it includes a move back up to his former home in the lightweight division.

Florian told The Boston Herald that he considered retirement but couldn't bring himself to bow out just yet because of his continuing desire to scratch his competitive itch and passion for learning.

"I still love this sport tremendously and still want to be a part of it," Florian told the newspaper. "I know myself, and it's not even just being competitive, but it's just being there, learning and competing. There's still very much a fire burning there so I'm going to do it."

He also said he won't fight for the next six months as he takes time off to add muscle to better withstand the rigors of fighting in the bigger weight class.

Florian of course fought as a 155-pounder from 2006-2010, going 9-3 in 12 fights. His only losses were in championship fights against Sean Sherk and BJ Penn, and a No. 1 contenders fight against Gray Maynard. The last of those caused him to move down and try his hand at the featherweight division, where he won his debut against Diego Nunes before falling to Aldo in a decision at UFC 136.

While his previous history may have exhausted his championship opportunities in the lightweight division, Florian told the paper he has several personal goals he is interested in chasing and would not put a timetable on how long he has left in his career.

The 35-year-old fighter is 14-6 all-time and is the only man in UFC history to fight in four different weight classes, beginning his career as a middleweight before competing at 170, 155 and 145.