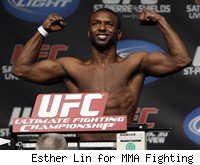 "The Tiger" will meet "The Gazelle" north of the border at UFC 140.

Jabouin (16-7) is 2-3 in Zuffa. The Montreal-native won his UFC debut at UFC 134 when he defeated Ian Loveland via unanimous decision. Prior to making his UFC debut in April, he fought for WEC.

The 5-foot-11 Watson looked impressive in his Octagon debut earlier in the month at UFC Live on Versus 6 when he defeated Joseph Sandoval in just 77 seconds via TKO.