Select UFC Events to Air in 3D Theaters Next Year 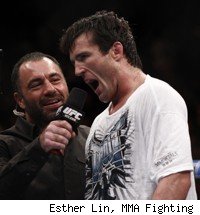 Beginning next year, fans will be able to watch select UFC events in 3D theaters across the country.

The organization announced Thursday that it had partnered with digital theatrical distribution company Cinedigm Digital Cinema to deliver 3D broadcasts of its pay-per-view events, starting with its annual Super Bowl Weekend card on Feb. 4, 2012. According to the release, the 3D broadcast will be available in more than 120 theaters across the country and will be the first of four of its kind next year.

The UFC's first-ever 3D broadcast was UFC Live on Versus 3 in March, however, it was only available on television.

The Super Bowl Weekend card has yet to be announced, but middleweight contender Chael Sonnen has pushed for his rematch with Anderson Silva to take place that weekend.