Mirko Filipovic: I Want to Prove to Everybody That I'm Still 'Cro Cop' 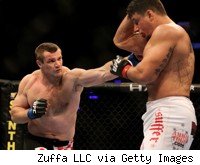 Mirko Filipovic is convinced that his career nearly came to an end on Thursday morning. Forget the fights. Forget the bloody battles he's been in, the knockouts he's suffered, the countless training sessions he's suffered through. This was serious.

The Croatian heavyweight, the Pride legend and veteran of nearly 40 MMA bouts, the great "Cro Cop" was nearly done in by a couple of stairs.

In his defense, the stairs were wet. It was raining out and he was headed off to training, but as he bounded down the stairs his foot hit a wet spot and he almost went down hard.

"I can't believe I didn't fall. I cannot remember when I was so scared," he said. "I could have broken my spine just like that. My foot slipped on the stairs because it was wet, and I was shaking for five minutes because I was so close, and I was so happy."

For Filipovic, the lesson in all this was clear right away. He's known his whole career that, in this sport, it could all be over in an instant. But it's one thing to know it intellectually or theoretically, and another to feel that fluttering fear that comes when your feet slide out from under you -- that irrational, trembling panic. He got the message: you're on borrowed time, pal.

For the 37-year-old Cro Cop, it won't necessarily take a freak injury to push him the rest of the way out of the sport. It could be as simple as getting beat by Roy Nelson at UFC 137 next Saturday night, and he knows it.

On this subject, Filipovic does not mince words. "I must win this fight," he said over and over again. "...I will have to beat him, and I will do it. I trained six months for this fight. I will do it."

But it's not because, if he loses a third straight fight in the Octagon, he almost certainly will not get a new contract with the UFC. Even if he wins, that contract isn't guaranteed since, as he put it, "First I have to beat Roy Nelson. And second, we have to make a deal."

It's not just his UFC future that's at stake, however. And it's not all about money, though, sure, he likes the money and, like any fighter, would prefer to make as much as possible before the ride ends for good. But for the man who has accomplished just about everything a person can in this sport, the stakes are different now.

But say he beats Nelson. Then what?

For starters, Filipovic said, there are all the wonderful little moments that come with a victory, moments he's learned to savor like the last few bites of a great meal.

"I want to feel that feeling when the referee raises my hand. I want to take that shower -- it's a special moment for me, taking that shower after my victory, and I'm so happy. I go back to the hotel and the next day I'm so happy. I don't even think about [money] until the UFC bookkeeper calls me a few days later to transfer the money."

But it's not just the temporary joy or the glory he's chasing, he said. He's also in search of a fitting end to a great career, whatever that would look like at this point.

It's a long way from the reasons he started this in the first place. Back in 1996, two years after his father died and "and left me and my mother all alone without a dollar in our pocket," the 21-year-old Filipovic got his start in K-1 kickboxing tournaments.

"It was the only way to drag me and my mother out of misery. That's how I started. I wanted to beat people because I wanted to get more and more money to ensure financial independence for me and for my family. That's all."

The fame? The attention? He never wanted any of that. In his perfect world, he could fight and get paid without anyone knowing him once he left the cage.

The fame came as a consequence of his success shortly after he moved from kickboxing into MMA and went on to become one of the sport's most iconic heavyweights. From Japan to the U.S., Cro Cop was a known man. But as time passed and his contemporaries got picked off one by one, Filipovic saw for himself how this sport can use up and discard a person -- even the great ones.

"Look at Fedor [Emelianenko]," he said. "Fedor was untouchable until one year ago, and today nobody's talking about him. He lost three times in a row. He was a great champion, great fighter, but he lost three times in a row and nobody talks about him. Only the fans who followed him his whole career respect what he did with his career, but that's the name of the game. I don't want it to happen to me."

In Filipovic's mind, at least, beating Nelson on October 29 is the only way to avoid the same fate as his old rival Fedor. That's why he put everything he had into preparing for this fight, he said, even bringing out another former opponent -- fellow UFC heavyweight Pat Barry -- to give him some quality sparring sessions.

"And believe me," he said, "it was wild sparring."

But no matter what he's done in the weeks leading up to this fight, he can't guarantee the outcome. He can't simply will his way to a victory that will keep his career and his name in the sport alive.

Losing remains a distinct possibility, and if it happens, he said, all he can do is "say to people, 'I apologize, and I'm sorry I waste[d] your time.' That's all I can say and that's exactly what I will say. I will disappear from the UFC and I will apologize, first to the headquarters of the UFC, because I was treated like a king, I was paid well, and unfortunately I didn't justify the treatment. I didn't justify the treatment. I don't want live on an old glory. That's why, believe me, I trained really hard for this fight."

Will it be enough to win? Better yet, if he does win, if "the old Cro Cop" comes back even for just one night in October, will that be enough?

Once you're reminded how great victory feels, and once you've proven that you're still capable of achieving it, how do you stop chasing it? How do you simultaneously become the person you used to be, yet not continue doing what he would have done? And who was that person, anyway? And where did he go?