Jamie Varner Un-Retires, Returns for XFC Fight Because 'I'm a Man of My Word' 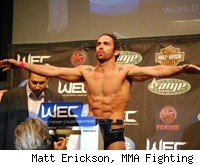 It might go down as one of the shortest retirements in the history of the sport. One month ago, after losing a decision to late replacement Dakota Cochrane at a Titan Fighting Championships event, Jamie Varner took to his Twitter to tell fans that he'd had enough.

"I gave fighting another shot I need 2 thank u guys 4 ur support! But I just don't have it anymore. Love u all but ull never c me fight again," Varner wrote.

A short time later, that message was removed. Shortly after that, Varner was back in the gym, preparing to have another go at it Friday night at an XFC event on HDNet. Maybe it just goes to show that you should never say never, even on Twitter.

"I think, honestly, I just made an emotional decision and an emotional remark," Varner told MMA Fighting this week. "I feel like I didn't perform very well in that last fight. The guy just overpowered me. He wasn't very good. I was much better than the guy, but I just got controlled. I didn't like that feeling, and I just thought maybe it was time for me to hang it up."

Of course, the former WEC lightweight champ didn't hold that opinion for very long. Once he started to think about it, Varner decided that maybe his passion for the sport hadn't evaporated after all. Maybe he'd just been hit with a few bad breaks, one right after another.

For starters, he said, his original opponent was pulled from the lineup just a few days before the bout. Then the replacement, Dakota Cochrane, couldn't make the lightweight limit, so Varner had to fight at welterweight despite the fact that he'd already completed the bulk of his weight cut to get down to 155 pounds.

After getting overpowered by a bigger opponent, Varner said, frustration briefly got the better of him. Hence the tweet.

"Then I took a week off, came home to talk to my trainers, and they were like, 'You shouldn't have even taken that fight.' It wasn't in my weight class, and too many factors played into that. Maybe I was a little overtrained, too. Who knows? But I prepared for one guy, got a completely different guy, and then it wasn't even in my weight class. I'm a lightweight. I have no business fighting a welterweight."

But it wasn't just a sober analysis of the need for weight classes that got Varner back in the cage so fast. Before the loss to Cochrane, he'd already signed to fight Nate Jolly on tonight's XFC event, so retiring would mean backing out of his contract, which he wasn't prepared to do, he said.

If that sounds like a man who's feeling a little worn down, that's not too far off. Two fights in the span of a month will take a toll on anyone, especially when one of those fights is a surprise move up in weight that you never planned on making. But for Varner, the retracted retirement proclamation was also at least partially driven by a general sense of fight fatigue.

At 27 years old, an age when most people are still working on getting established in a career, Varner is feeling the effects of his. Once the fight with Jolly is in the books, win or lose, he plans to take some time away and re-evaluate things. Maybe he'll take a couple pro boxing matches, he said, or do some grappling tournaments just to get the competitive juices flowing again.

Not only has his recent run of fights had him feeling like he's been "non-stop dieting," it's also left him "a little burnt out," he said. But against Jolly he sees a good opportunity to get the taste of that last defeat out of his mouth, so at least he can take some time off with a win under his belt.

"I know this guy is a very, very beatable guy. I'm bigger, I'm faster, I'm better in every position. I'm not too worried about what he brings to the table. If I go in there and perform to even half what I'm capable of, I should walk away with the W."

Whether he decides to stick around in the sport or just keep on walking afterwards, we'll have to wait and see.