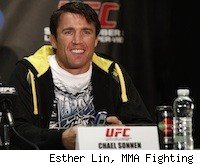 Chael Sonnen is taking his act to the 2011 World MMA Awards.

The loquacious middleweight fighter has been named co-host for the 2011 World MMA Awards by Fighters Only Magazine, the publication announced Friday afternoon. Sonnen will share the stage with TV personality Molly Qerim, who co-hosted the event last year with Randy Couture.

News of Sonnen hosting the show was first reported by MMAWeekly.com Friday morning.

In addition, it was also announced that the awards show will air via tape delay across the Fox Sports regional networks and on Fuel TV. Air dates and times will be announced in the coming weeks.
More Coverage: 2011 World MMA Awards Results


"I say it every year that we want to make the awards show bigger and better and every year we have done just that," Rob Hewitt, CEO of Fighters Only, stated in a release. "However, none of it would be possible with out the support of the MMA industry, the fans, our sponsors and TV and venue partners who all believe as much as we do in this project. To celebrate the sport we love and the people within it in the way that we do is a crowning moment of the year for Fighters Only and we can't wait to reveal this year's winners."

World MMA Awards winners are selected by the fans. You can cast your vote by clicking here.

The fourth annual World MMA Awards takes place Wednesday, Nov. 30, at the Pearl Theatre inside the Palms Casino Resort in Las Vegas. The event is open to the public, and tickets go on sale Friday afternoon at the Pearl box office or any Ticketmaster location.