Paulo Filho on Fighting: 'I Don't Want This Anymore' 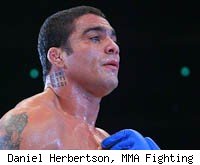 Former WEC middleweight champion Paulo Filho says he is ready to close the book on his competitive MMA career.

In a recent interview with Brazil's Tatame, Filho says he plans on retiring after his Nov. 26 fight at KSW 17 against Mamed Khalidov -- if that fight even happens.

"I may fight in November because I already signed the contract, after that I will retire," he tells Tatame. "I don't want this anymore."

After going 16-0 in the first seven years of his career, Filho suffered his first loss at WEC 36 against Chael Sonnen and never quite recovered. His battles with depression and substance abuse (in the Tatame interview, Filho said his only drug issue was with rohypnol, a prescription sedative) had impacted his work inside the cage.

Following the loss to Sonnen, Filho was not picked up by the UFC and has since compiled a 6-3-2 record. In his last fight, Filho fought Satoshi Ishii to a draw, a decision rendered by what appeared to be partisan judges in the Brazilian event. Filho himself after the fight said Ishii should have been awarded the win.

"I'm not thinking about that right now, but I don't wanna know about fighting anymore," Filho said. "I had good and horrible moments. I did what I could, it's over. I was far from what I could have been, but I'm satisfied. It's over."