Diego Brandao Talks About His Fight: 'I Want to Destroy the Guy' 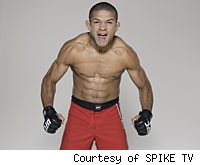 On this week's episode of The Ultimate Fighter, Diego Brandao had a run-in with Steven Siler outside the Octagon, then found out that Siler would be his next opponent inside the Octagon as well.

Brandao and Siler were the last two fighters to get matched up in this season's featherweight tournament, and their fight will be shown on next week's episode. MMAFighting.com caught up with Brandao to discuss his feelings toward Siler outside the cage, his views on what kind of opponent Siler would be and how he prepared for the fight.

Our interview with Brandao is below.

Michael David Smith: At the start of Episode 5 they showed you being very angry at Steven Siler. What was that all about?
Well, I think the show wanted to show the drama, but he got in my face and challenged me and I was just like, "Why are you getting in my face?" You guys saw me punching the wall which made me look crazy, but I was just totally focused on beating everyone. In that house there were a lot of young kids, a lot of them were talented but a lot of them didn't know what to do with that opportunity. I knew I had to be focused on my opportunity to beat all of them.

So when you found out that you'd be fighting Siler in the cage, did the run-in with him motivate you?
No, because inside the cage it's different. Inside the cage, I'll throw down with anyone. I don't have anything to lose. I'm going out there like a pit bull.

Going into the fight, how did you think you matched up with Siler?
I think he thought he could beat me, but I'm a black belt in Brazilian jiu jitsu, and I also thought I could knock him out. I was feeling very good.

As you prepared for the fight did you develop a specific game plan for Siler?
No, before the fight I don't have a strategy like, "Oh, I have to take this guy down, I have to do this, I have to do that." To me, I don't care. I go in there and I want to destroy the guy. I don't want to think too much. I go in there, make sure my hands are up and fight hard. When you push it you win the fight.

It sounds like you were confident heading into the fight.
That's just my training. I train real hard. I'm not there in the house to make friends. The guy made me angry but I'm a nice guy, a happy guy. I just wanted to go in there and show I'm the best. It's 32 guys fighting for one contract so I'm not in it to be friends with anybody.

Check MMAFighting.com next week when we check in with Brandao following the airing of his fight with Siler.