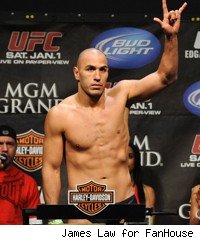 On the one hand, UFC light heavyweight Brandon Vera owes Thiago Silva, the man who beat him at UFC 125 in January, a debt of gratitude. That's because had Silva not tested positive for steroids following the fight, Vera knows he would be looking for work outside the UFC.

"Stuff happens in weird ways," Vera said on Monday's episode of The MMA Hour. "For sure this was a blessing in disguise. So whether it came from up top or karma was just like, 'Look, man, he's been through enough. Let's give him one. Let's see what he does with it.' Either way, I'm running with it."

On the other hand, Vera has no problem expressing how he really feels about Silva, who celebrated in the cage en route to beating "The Truth" via unanimous decision on Jan. 1.

"I think he was just celebrating, but now that I know that he was a juice monkey, for sure, I think he's a piece of sh**."

Following the fight, the UFC released Vera, who had just dropped to 0-3 in his last three fights. But after news broke that Silva had been suspended for a year by the Nevada State Athletic Commission for testing positive for steroids and providing a fake urine sample, the organization gave Vera his job back. He'll get another shot to realize his UFC dreams next weekend when he meets Eliot Marshall at UFC 137.

"I was still bewildered the whole time wondering why I looked so bad," Vera said of his fight against Silva. "But then when the test came back, I understood why, man.

"The whole fight I just kept asking myself, 'What the hell is going on? Why is this?' You know, I train with Phil Davis, 'Hapa' Travis Browne, the Nogueira brothers and Junior dos Santos. I train with some big dudes, man. Nobody has ever been able to hold me. The whole time during the fight, while we're on the ground, I'm just thinking to myself, 'What is going? Why is it like this?' And it just wore on me the whole time. On the feet, I was happy as hell. I was smiling the whole damn time. He's so slow, but then as soon as we hit the deck, it just felt like I was a little child."

Vera says he hasn't talked to Silva after the fight, and he has no intention of reaching out to him any time soon.

"No interest at all," he said. "Not till I smack him in his face again."