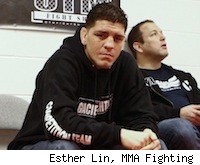 The new UFC 137 event poster features the tagline "Expect the Unexpected." It is fitting given that there have been multiple main event switches leading up to the October 29 date, but it could just as easily be referring solely to one of the men gracing the artwork.

For years, Nick Diaz has been an enigma to many on the outside looking in. His friends and teammates say he is fiercely loyal, hard-working and yes, even kind-hearted. But we rarely see that side of him. The public face of Diaz is usually scowling, irritable and contemptuous.

That duality may well be an accurate portrayal of Diaz in his private and public settings, and it may not be a bad thing. Because Diaz's personality perfectly fits into a sport like MMA. To his fans, he's an ass-kicking, counterculture anti-hero. To his detractors, he's an overrated, irascible ingrate. Whatever the case, he's undeniably a one-man MMA phenomenon.

On Wednesday, Diaz was scheduled to be one of four participants in a media teleconference, along with his opponent BJ Penn as well as heavyweights Matt Mitrione and Cheick Kongo. But when the call began, Diaz was nowhere to be found.

The UFC had been in constant communication with Diaz's manager Cesar Gracie, a company spokesperson said, and they were still searching for him as the call began. Through Twitter, UFC president Dana White put the blame on his staff, saying they "dropped the ball on the Nick Diaz no-show." But Diaz did show up, just not on time, dialing in 40 minutes late and saying that no one had told him it was going on until that moment.

Whether you believe that or not is of course, up to you. But it must be noted that Mitrione and Kongo were invited to the call on Tuesday, and they were around at the appointed time.

In the grand scheme of things, it wouldn't be a big deal, but based on Diaz missing two previous press conferences that cost him a title fight, it became a story. But that quickly changed. When he arrived late, it became only part of the story. And when he started talking, it became moot. Better late than never, after all.

He said that he regretted the actions (or inactions) that led to his removal from the St-Pierre fight. That he wasn't happy about fighting Penn. That he believes Penn to be a better all-around fighter than GSP. That someone in his camp was getting paid way too much and not doing their job of handling his schedule. That the Strikeforce belt never meant much to him.

In 15 minutes, Diaz did more to shift the narrative of UFC 137 storylines than Penn, Mitrione and Kongo did in the preceding 40. That's just the way it is when he speaks.

And isn't that the point of conference calls and press conferences? When it comes to those, Diaz says more with less than anyone in MMA. If he was as verbose and microphone friendly as say, Chael Sonnen, it wouldn't quite be the same. Diaz shows up when he wants, wedges open a window into his mind, and lets you in look in just long enough to find yourself fascinated and wanting more.

"I think there's nothing wrong with the media focusing on that stuff," he said. "It's something to talk about. It's a story. I don't want to say it's good for the sport, the guy not showing up for the press conference, but it is another character in the sport, you know?"

That Penn ended his answer with a question seemed perfectly fitting, too. Sometimes Diaz leaves you with an uneasy feeling, like you're not sure if you're in the midst of watching someone unravel, or you're just watching someone who's conflicted.

Hopefully it's the latter, because Diaz's talents deserve a worthy showcase of invested fans. And in some ways, this whole bizarre UFC 137 scenario may end up benefitting all the parties involved. Diaz was very well known by MMA fans prior to this, but an untold number of others are getting a taste of his brilliance or madness before a possible showdown with St-Pierre. If Diaz can walk away with a win over Penn, and St-Pierre eventually beats Carlos Condit, the Diaz-GSP fight becomes exponentially bigger than it would have been.

In the end though, no one summarized Diaz better than he did himself. He seems to be able to compartmentalize his life into its various parts. The fighter is different from the person. The problems are put away into their own corner to be ignored. Each moment belongs in its own box.

"I don't know what's going to happen with me, but it's not going to make a difference whether or not I whine or cry about it or panic," he said. "I'm just going to do what I always do: train. And when it's time to fight, I go fight."

Outside of the cage, we never quite know what to expect of Diaz. He is wildly unpredictable and generally ducks attention, but he when speaks, he says exactly what's on his mind, consequences be damned. And inside the cage, we know exactly what to expect. Win or lose, he will force his opponent into a pitched battle. He will attempt to break your will, consequences be damned. You may like him or you may not, but it's hard to deny that in a sport full of singular personalities, he's one of the most intriguing ones MMA has ever seen.