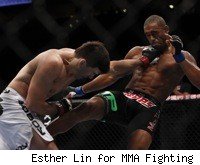 Middleweight fighter Jorge Santiago has been released from the UFC following two straight losses inside the Octagon, sources have confirmed to MMAFighting.com. Tatame.com first reported the news.

After winning 11 of 12 fights outside the UFC, Santiago was given a second chance to fight for the organization. He subsequently lost to Brian Stann at UFC 130 via second-round TKO and dropped a unanimous decision to Demian Maia earlier this month at UFC 136.

The former Strikeforce Middleweight Grand Prix champion and Sengoku middleweight champion went 1-2 in the UFC in 2006 before being let go. He would go on to beat the likes of Trevor Prangley, Siyar Bahadurzada and Kazuo Misaki en route back to the UFC.

The 31-year-old Brazilian, who now resides in Florida, has a 23-10 pro MMA record. No word just yet on where he will fight next.