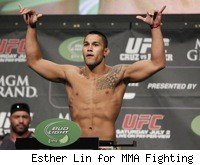 A main card slot on the UFC 137 pay-per-view opened up following Tuesday's news that Georges St-Pierre had withdrawn from the main event due to a knee injury, and as a result, the UFC promoted the Brad Tavares vs. Dustin Jacoby middleweight fight to the PPV telecast. The promotion confirmed the news via UFC.com late Tuesday night.

The Tavares-Jacoby tilt will join BJ Penn vs. Nick Diaz, Matt Mitrione vs. Cheick Kongo, Roy Nelson vs. Mirko Cro Cop and Hatsu Hioki vs. George Roop on the PPV, which will air live from the Mandalay Bay Events Center in Las Vegas on Oct. 29.

More Coverage: UFC 137 Fight Card
Tavares (7-1) is looking to rebound from his first professional loss to Aaron Simpson at UFC 132 in July. Prior to the loss, Tavares, a cast member on TUF 11, had gone 2-0 inside the Octagon.

Jacoby (6-0), who replaced the injured Tim Credeur earlier this month, will be making his UFC debut next week. The former college football player made his MMA debut last November and has finished all six of his opponents.