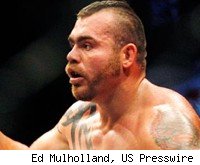 ProElite is back on cable television.

The organization announced late Monday night that it had signed a multi-fight broadcast deal with HDNet to air its events live on the cable network. As a result, ProElite: Big Guns will air live on HDNet on Nov. 5 from the i wireless Center in Moline, Ill.

"Our multi-fight agreement with HDNet elevates the ProElite brand to a national MMA audience with a preeminent broadcast partner," said Paul Feller, President and CEO of Stratus Media Group, the parent company of ProElite, and Chairman of the organization. "This strategic partnership offers new opportunities for corporate sponsors and advertisers looking to reach this passionate and rapidly growing audience of ProElite fans."

More Coverage: ProElite 2 Fight Card
The co-main event for the organization's second card under new ownership will feature Andrei Arlovski vs. Travis Fulton and Tim Sylvia vs. Andreas Kraniotakes, plus the start of eight-man heavyweight tournament.

EliteXC, a subsidiary of ProElite, debuted on Showtime in Feb. 2007 and subsequently folded in Oct. 2008. In Aug. 2011, the new ProElite launched, with its first event airing online.