Dan Wheldon, MMA and Accepting the Risks of Danger in Sports 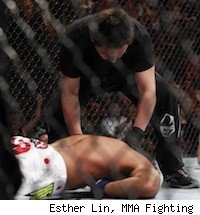 Las Vegas can be the saddest place in the world. Some say it's a city based on hope, but the flipside is that it's a city built on losing. Lost slot machine pulls and broken dreams erected those castles we call hotels. Every time I fly into McCarran Airport, I look at the faces arriving with me, smiling and happy. And then I look at those waiting to leave, exhausted and beaten. It's all so efficiently run, old losers out, new money in. It's a city of luck, and few have it.

I think about that when I cover sports. Luck is the intangible that athletes alternately crave and fear, because they never know if it's going to work for or against them. For IndyCar racer Dan Wheldon on Sunday, luck was not on his side. I don't know nearly enough about auto racing to say whether Wheldon could have done anything to prevent his involvement in the crash at Las Vegas Motor Speedway, but I doubt it. And certainly there was nothing he could have done to prevent his car crashing the way it did, cockpit first into the wall.

Wheldon's death predictably led to a flurry of questions asking what could have been done differently. That's understandable in the sense that no one wants this sort of thing to happen again, so it's worth a closer examination of safeguards. But it also undercuts the absolute and tragic truth that sports are risky, and people die participating in them all too often.

I also think about that when I cover MMA. Our sport is undeniably violent. It's not violent in any different way than football or ice hockey, but because it doesn't try to hide what it is, because it is directly violent, as opposed to creating man-made objectives like touchdowns and goals to disguise the danger, it is slightly less palatable to those who prefer their hard truths hidden.

We put safety measures in place for sports like auto racing, football, hockey and MMA in an attempt to limit injury and ward off death, but the fact of the matter is, we can never guarantee it.

As long as humans have walked the earth, we've attempted to go higher, farther, faster. We've pushed limits. We've walked the edge of what's possible, knowing that only the result will determine when we've gone too far.

Sports is at its best, a celebration of surpassing previously assumed limitations, and at worst, a cautionary tale about dreaming bigger than possibilities. Not just team sports, but things like mountain climbing, skiing and horse racing are all guilty of the same. UFC president Dana White likes to say that fighting is in our DNA, and he's partly right, because survival is the basest human instinct, and what is survival if not a fight?

But beyond that, our DNA is programmed to test borders. It's why we've shot manned rockets off to the moon and explored the depths of the sea. Fighting is simply a personal test of limits with the hope of learning some greater truth about life and ourselves. Even when you fail, there is nobility in the effort.

On November 12, the UFC will introduce their brand of the sport to a network television audience for the first time. Understandably, there is a lot of excitement about the possibilities of expanding the fan base and growing MMA. We tend to only see the positives that such a move holds. But as always, we must know that danger lurks around every corner. As much as we like to tout the UFC's safety record -- and it is a strong one -- there's been plenty of times we've had to hold our breath until a fighter got up from a bad knockout and walked off on his own power.

There is always a price to be paid for participation in physical sports. Maybe it is something simple, like a broken bone or muscle tear, but unfortunately, there are always worse possible outcomes. Recently, the hot-button issue has been concussions, a problem which has already quietly reared its head in a sport like ours. Former UFC fighter Jeff Joslin retired in his early 30s after experiencing a series of concussions. Chuck Liddell was essentially forced into retirement after being knocked unconscious in three straight fights. But we tend to sweep that kind of thing under the rug in favor of more glamorous subjects.

Next week I will head back to Las Vegas again for UFC 137. Two of the featured fighters on the card are Georges St-Pierre, who is often criticized for a style that is said to be risk-averse, and Nick Diaz, a fighter who is aggressive while sometimes bordering on reckless. The interesting thing is that with either their actions or thoughts, they say the same thing. St-Pierre's style makes it clear he understands the danger inherent in a fight and chooses a tactical route. And despite Diaz's action-oriented style, he has repeatedly said he does not enjoy fighting.

Fans and media often ask our favorite athletes to throw caution to the wind. But when you live in the world that they do, it is hard to lose sight of what we often forget: that there is danger in every moment. There have already been two deaths -- Sam Vazquez and Michael Kirkham -- in the sport stemming from sanctioned competition. Think about that next time you're quick to criticize a fighter for employing an actual strategy. These men accept ultimate risk every time they step into the athletic arena. Wheldon knew it when he strapped into his seatbelt, and GSP knows it when the cage door is locked behind him. The athletes participate in search of the perfect performance, and we watch because it is riveting to see men test the limits of what's possible.

At least our sport is generally honest in its possibilities. There are real people with real lives behind the pretty punches and powerful kicks. When they land, lives can be changed forever. Fortunately that is rare, but the stark truth is this: even with all the safety measures in place, sometimes the only thing that saves us from the worst possible outcome is a little bit of luck.