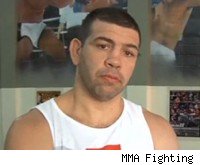 Veteran heavyweight Pedro Rizzo has suffered an arm injury and will not be facing former UFC champ Tim Sylvia at ProElite 2 on Nov. 5 in Moline, Ill.

"Unfortunately I got injured, training here in Holland, had a partial tear in the triceps tendon of my left arm," Rizzo tweeted. "... So I would like to apologize to the ProElite and especially to Tim Sylvia because I can't be in the ring on November 5th to face him ... I think I am in the prime of my condition and I'm really very frustrated with what happened."

Rizzo, 37, was looking to return to the ring for the first time since his TKO win over Ken Shamrock at Impact FC 2 in July 2010. The former UFC title contender has been saying he wants to make another run in the UFC before he retires.

The 35-year-old Sylvia is 1-1 in 2011, losing via TKO to Abe Wagner in January and then stopping Patrick Barrentine in August.