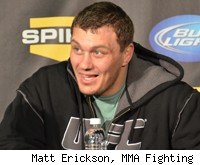 The biggest test of his professional fighting career awaits Matt Mitrione on October 29, when he steps into the cage to oppose the dangerous veteran striker Cheick Kongo in Las Vegas.

At 5-0, Mitrione is still unbeaten, yet still quite green in the game. Still, he's opened some eyes with his power, conditioning and aptitude for learning and implementing new techniques. And while Mitrione's never displayed any lack of confidence, he says that the changes he's made in his training and diet have him chomping at the bit to get in the octagon against Kongo.


Just how ready is he? Mitrione, who was a pro football player in the NFL before moving over to MMA, claims he's reached his apex, saying he is more confident for his UFC 137 fight than he's ever been for any sporting event in his life.

"I feel like I am a very, very dangerous human being right now," he said.

Now in his last weeks of camp, Mitrione is convinced he is well prepared to contend with all of Kongo's weapons. Though widely considered a kickboxer, Kongo has underrated wrestling (he takes down opponents on 65 percent of tries, according to FightMetric), and he also has powerful ground strikes.

"I feel better right now than I ever have in my life," he said. "If Cheick's lucky enough to beat me, he beat the very best product I could put out there. The very best."

Mitrione could have been distracted by the construction of his new gym, Integrated Fighting Academy, but he said he's put some of that work on hold until after the completion of the Kongo bout.

In his last fight, he knocked out Christian Morecraft in the second round of their June encounter. Kongo is a decidedly higher caliber opponent, and a win could launch Mitrione into the fringes of the division's top 10. Less than two years after his UFC debut and coming from a pro football background, that type of rise is against the odds not only for its speed but its unlikeliness.

Mitrione said he isn't thinking much past Kongo, but acknowledges that the fight is a good measuring stick to "see if I'm legit or not."

But Mitrione also knows there is danger lurking, citing Kongo's resiliency, experience and fight IQ as reasons to be wary. Kongo showed all those attributes in his last fight against Pat Barry, where he was in big trouble in the first round and staggered by Barry's power, only to rebound for a sudden, comeback knockout.

"I feel that I am extremely dangerous anywhere inside of an 8-sided cage," he said. "Whether it's up against the fence, on the floor, up on top of the cage, underneath the cage, I feel wherever the hell it's going to go, I'm going to be there ready to scrap. I feel that Coach Neil put so much time and energy in me that if Kongo can get it to the ground, he won't want to keep it there. If he does, I'll tap him. I promise, I'll tap him or I'll break something, but I'll get something done."