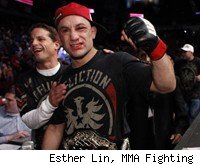 The struggling New York Jets meet their rivals the Miami Dolphins on Monday night, and they have called upon on old good luck charm to help motivate them after a disappointing 2-3 start.

UFC lightweight champion Frankie Edgar will meet with Jets players Sunday evening to help inspire them like he did last November prior to a game against Houston. UFC officials confirmed the visit with MMAFighting.com on Sunday.

This marks the second time Edgar, a native of Toms River, N.J., has been invited by the team to talk to the players. Jets head coach Rex Ryan, a big MMA fan, invited Edgar to address the team on the eve of a Week 11 meeting against the Texans in November 2010. The Jets ended up beating the Texans 30-27 after scoring a touchdown with just 10 seconds left in the game.

After the comeback victory, Jets quarterback Mark Sanchez credited Edgar for motivating his teammates before the game.

"The guy is barely taller than this podium, and this guy, he beats BJ Penn in a UFC Championship bout," Sanchez said. "Everybody counted him out. They wanted a rematch, and then he went back and beat him even worse. Talk about a guy who's mentally tough, physically tough. He came in and spoke to the team last night. Perfect timing. Just talking about never giving up, being counted out, playing until the end, fighting and believing in yourself, believing in your team and the people around you. Those were the only people telling him he could win the fight. Everybody else counted him out. ... Perfect timing for Rex to bring somebody in like that and give us a little extra inspiration. So it was great for Frankie to come in."

Edgar's story has become even more inspirational after coming back from a disastrous first round against Gray Maynard at UFC 125 to force a draw. Then, in a fight reminiscent of their Jan. 1 classic, Edgar once again came back from the jaws of defeat to knockout Maynard in the fourth round at last week's UFC 136 event in Houston.