After First UFC Win in Rematch With Leonard Garcia, Nam Phan Over Sting of First Fight 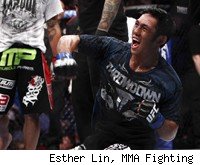 After 10 months of answering questions about Leonard Garcia, at least Nam Phan finally can change his response.

Phan first fought Garcia last December at the TUF 12 Finale in Las Vegas, a Fight of the Night-winning slugfest that saw him come out on the short end of a split decision. Though Phan outstruck Garcia in every round, according to Fight Metric, two judges gave Garcia two rounds. The third agreed with most of the fans, as well as the vast majority of MMA media – and gave all three rounds to Phan.

After UFC 136 a week ago in Houston, though, Phan finally got a little closure – and his first UFC victory – with a unanimous decision in another slugfest with Garcia in the rematch. He hopes it's the one people will ask him about now.

"(The first loss) stung pretty bad," Phan told host Ariel Helwani on Monday's edition of "The MMA Hour." "People were telling me, 'You got robbed!' over and over again, reminding me. I tried not to dwell on it, but it took awhile."

In the rematch, Phan (17-9, 1-2 UFC) was mostly dominant – leaving little doubt in the first two rounds. Though Garcia seemed to hurt him in the third and had him backing up several times, Phan still set a UFC record for most significant strikes landed in a fight, according to FightMetric's tabulations.

Nam's 174 significant strikes landed in the 29-28 unanimous decision win passed Chris Lytle in his win over Matt Serra at UFC 119. Phan credited his boxing background, including four professional fights, for his success in the standup game.

"It isn't always about the power – it's about the high punch count," Phan said. "My coach said 'You have to compete in boxing to get good at striking.' I started training with him in 2003, and started competing in amateur boxing, Golden Gloves, and then I went to compete in professional boxing. I don't have a passion for boxing. I don't love it like I love mixed martial arts. I only did boxing to improve my mixed martial arts skills."

After 23 pro MMA fights, including a loss in the WEC and a pair of losses in Strikeforce, Phan got a shot at the UFC on "The Ultimate Fighter." And though he didn't make the finals, he still got a crack at the promotion. And now he has a win after starting with a pair of losses.

Though the first loss to Garcia had the MMA world screaming robbery, including UFC president Dana White, Phan still knew a third straight loss could be problematic going into the Garcia rematch. But he said he tried to put that out of his mind.

"I wasn't even thinking about a two-fight losing streak or that I might get cut," Phan said. "I was going in there to have fun and to make this my best performance ever. This could be my last pitch, and if I strike out I'm going home. So I've gotta hit this ball out of the ballpark, man. I can't take the UFC for granted and (I have to) realize I could get cut. I've got to know I'm expendable."

Now that Phan can breathe a small sigh of relief that he will be sticking around in the UFC for a while, he can start thinking about what might be next for him.

After two Fight of the Night wins in his first three fights, he knows the kind of opponent he's looking for next.

"Whoever it is, I want that person to put (on) a good fight with me."