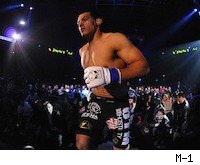 It didn't come the way most expected, but M-1 Global light-heavyweight champion Vinny Magalhaes successfully defended his championship, scoring a third-round TKO at 3:13 of the third round.

Magalhaes, a jiu-jitsu star who just last month won the gold medal at the Abu Dhabi Combat Club submission wrestling world championships in his weight class, came into the fight with seven of his eight career victories by way of submission. And though he threatened at several moments of the fight, the end came after he slammed opponent Mikhail Zayats with a head kick, then finished him with ground strikes to force a referee stoppage.

It was the fifth straight win for Magalhaes, who is now 9-5-1.

Zayats had his moments, particularly in the standup, where he nailed Magalhaes with a series of leg kicks throughout the duration of the bout. But Magalhaes came alive in the third to pull out the win in the main event of a show held at Grand Canyon University Arena in Phoenix.

In an interim heavyweight championship fight, Kenny Garner outlasted Maxim Grishin in a fifth-round submission due to strikes. It was a bout that saw both men battle through exhaustion before Grishin could take no more with just 53 seconds left in the five-round affair.

The fight was somewhat marred by some bizarre problems, including a shortened round when the ringside clock operator did not heed the referee's timeout signal, referee positioning errors on restarts from under the ropes, and Grishin's near-refusal to get back to his feet near the end of round four.

Amazingly, Grishin nearly came back to win, nearly locking Garner in an armbar before Garner pulled free and blasted his way tot the victory. Garner (8-3) is expected to next face current heavyweight champion Guram Gugenishvili, who injured his elbow just last week. Gugenishvili is undefeated at 11-0.

The other three main card fights all ended in a flash. In the opener, Daniel Madrid defeated Tom Gallichio via armbar in just 48 seconds. Then, Yasubey Enomoto topped Josh Thorpe with a triangle in 67 seconds, and not to be outdone, Arthur Guseinov finished off Eddie Arizmendi with a heel hook submission in just 50 seconds.