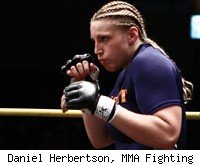 There's a temptation to say that Amanda Lucas wants to fight so much, she'd take a bout on Tatooine.

Though Lucas certainly must be growing tired of the constant "Star Wars" references, she at least suffers them with a smile. The adopted daughter of George Lucas, creator of the biggest movie franchise in history, knows the mentions of her ultra-famous father and his uber-famous space saga are inevitable.

But what Amanda Lucas wants more than anything is to reach a point in her mixed martial arts career when "Star Wars" and her father are but mere footnotes, not the lead.


"it doesn't bother me – I'm proud of my family," Lucas said last week on "The MMA Hour" with host Ariel Helwani. "I hope to do my best on my own and prove I'm not just George's daughter. I work just as hard as my training partners and I don't want any special treatment. (But "Star Wars" is) going to get mentioned – it's nothing I can hide."

Lucas, 30, even had parts in the latter three films in the "Star Wars" saga, Episodes I, II and III, which helped fulfill a childhood fantasy of performing, even though she said acting is not where her talents lie.

"I'm not an actress," Lucas said. "It was fun, and it was something I can say that I did. I always wanted to be a performer. I liked the idea of acting, but it wasn't really my thing. I wanted to be Madonna or Janet Jackson, but I can't sing very well."

Instead, Lucas (2-1) now focuses her performance ambitions on fighting. After losing her MMA debut in May 2008, Lucas has won two straight, including a first-round submission win at Deep 55 in Japan two months ago. She'll next fight at Deep 56 on Oct. 29, her second fight in two months, but just her fourth in three and a half years.

Lucas, who trains at Strikeforce lightweight champion Gilbert Melendez's new gym, said though the women's MMA market is much tougher to crack than the men's, she wants to find a way to keep getting fights.

Lucas will fight in Japan for the second time after her Deep debut in August. And this time, she's hopeful that she can avoid a certain highly iconic entrance theme. Lucas said she would never walk out to the theme from "Star Wars," but at Deep 55, it was played anyway.

For a while, Lucas will have to get used to the "Star Wars" comments. But she believes as long as she keeps training, fighting and building a name for herself. And famous father or not, her motivation is pretty simple.