Report: Vancouver Likely Not on UFC's Calendar in 2012 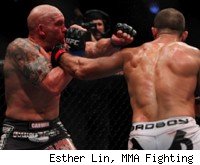 After bringing MMA's biggest traveling road show to Vancouver in both 2010 and 2011, the UFC is unlikely to return to the picturesque British Columbian city in 2012.

That news comes from the UFC's director of operations in Canada, Tom Wright, who told The Canadian Press that the promotion would visit three of the country's cities next year, and Vancouver isn't expected to be one of them.

The reason? The shows certainly weren't financial failures. 2010's UFC 115 did a $4.2 million gate, while UFC 131, held this past June, drew a $2.8 million gate. Instead, the problem is regulatory stalling. Both of the UFC's events were held during a two-year test period held by the city after overturning a previous ban on MMA. That test period will end in the coming months and apparently, the prospects of sanctioned MMA will go with it.

"And the disappointing thing for our sport is that after a two-year test period, they've had two tests -- ours," Wright said. "Because no other promotion could afford the indemnification or the insurance costs or the other things -- or actually have the perseverance to get an event to be held there."

While the MMA events were both financial boons for the city and promotion, UFC officials navigated a rocky road with Vancouver officials over several issues, including insurance costs. Most recently, before the UFC's scheduled June 11 event, Vancouver police chief Jim Chu requested that the promotion contribute to policing costs "to prevent what might occur in terms of neighborhood problems."

The UFC refused the request, saying they weren't prepared to be treated differently than other events held there. Ironically, at the time, Wright told MMA Fighting that he explained to Chu, "If I were the Chief, I'd be more worried about Canuck fans (celebrating or crying in their beers) than UFC fans."

The UFC event came and went with no problems, but just days later, after the hometown Canucks lost in the Stanley Cup Finals, over 100 people were arrested as riots erupted on the city's streets.

According to Wright, Toronto and Montreal will see major UFC shows in 2012, but the third Canadian host city remains undetermined. It's possible the third show will be a smaller "Fight Night" event.