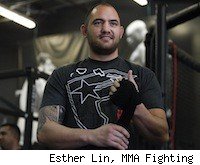 Coming off his Knockout of the Night performance in a win over Stefan Struve in the spring, Travis Browne came to UFC 135 surrounded by big expectations. But there would be no flashy highlights this time around. His durable opponent Rob Broughton made the fight a battle of attrition, and Browne had to settle for a workmanlike unanimous decision.

With the win, Browne kept his record unbeaten at 12-0-1. And perhaps just as importantly, he showed he could win a different kind of fight, a tough, slow grind. For his long-term future, that meant just as much to Browne as a spectacular knockout.

"It wasn't my most fulfilling win but it was a win nonetheless," Browne said. "And especially in the UFC, it's something you have to be grateful for. I put in some hard work. I beat a tough guy. Do I think I could have done better? Definitely. But you have to tip your hat to him. He's a tough guy who took a shot. That's his game, the grind match. I beat him at his own game, so I can't be that upset. But at the same time, I felt I could have done better."

To Browne, "better" includes a finish. A powerful and athletic striker with a 6-foot-7, 255-pound frame, the native Hawaiian who now trains with Team Greg Jackson says he always enters fights with a knockout mind set. Nine of his wins have ended in that fashion. But as he progresses, he knows that there will be opponents who resist being put away. That's why to him, defeating Broughton over three rounds really meant something.

Browne said that in his entire career, he's never hit someone so hard and not had them go down. On more than one occasion, he hit Broughton and felt the impact reverberate up his arms past his elbows. By the time the fight was over, his knuckles were sore and shin was bruised from all the strikes, but there was still no KO.

That led to some criticism of Browne's performance. More criticism also came at him for conditioning, as the fight slowed in Denver's mile-high thin air.

But Browne said any negative words will only serve to motivate him to get better and fight to a more decisive finish next time around. The win may have lacked style points, but he fought through the altitude issues, out-muscling and out-lasting Broughton.

"I try to to be a pleaser, to please the fans," he said. "I don't want to just go out there and win. I want people to be like, 'Holy s---, did you see what Travis Browne did?' That's my style, that's how I like to fight. I like to please the fans. Go out, knock somebody out, choke them out, break an arm. Something. I'm trying to be on SportsCenter every single fight. So to have a fight like that? That was a learning curve."

To Browne, continuing to round out his skill set is the short-term and long-term goal. Because in order to beat the top echelon fighters, he can't simply rely on his striking or ground skills or any one thing. Evolution is the key.

To that end, when asked who he would like to face next, Browne doesn't name any of the division's biggest names. Instead, he names Mike Russow, a 6-foot-2, 260-pounder with a wrestling background and a propensity to turn fights into slow grinds. Though he's not a huge name in the UFC, Russow is 14-1-1 overall, and hasn't lost in three octagon fights, stopping Todd Duffee and Jon Madsen in his most recent bouts.

If it happens, that match could turn out to be a 15-minute struggle. But in order to move forward, these are the tests that Browne knows he has to pass. And if he can pass them in SportsCenter-fashion, well, that's all a bonus. It will mean his plan is taking shape.

"Those are the guys who if you can create those moments against those guys, then you know you're ready," he said. "For me, I want to mentally know I'm ready to take the next step to go chase the title. Yeah, I want these fights where people are going to stand in front of me and I'm going to knock them out. But is that going to be best for me in the long run? Probably not. I want those situations and knockouts and submissions against guys who won't just give them to me."