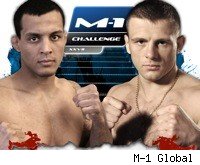 M-1 Global returns to Showtime Friday night, and once again, the card has received little to no fanfare or press.

Magalhaes has won four in a row and six of his last seven fights since losing to Eliot Marshall at UFC 97, while Zayats also enters the title fight riding a four-fight winning streak.

M-1 heavyweight champion Guram Gugenishvili (11-0) was scheduled to defend his title against Kenny Garner (7-3) on the card but was forced to pull out of the fight after suffering an elbow injury in training. This marks the second fight in a row that Gugenishvili has withdrawn from, as he missed his July 8 title defense against Pat Bennett due to another injury. Maxim Grishin (11-5) will now face Garner for the promotion's interim heavyweight title in the co-main event.

This marks the promotion's third event on Showtime with one remaining on its current contract with the premium cable network.

Below is a look at the entire card.