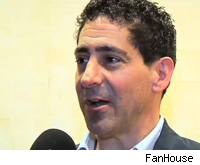 Update: HBO officially announced Thursday that Hershman has been hired as the new president of HBO Sports. His reign begins on Jan. 9, 2012.

The outlet is also reporting that Hershman, who left Showtime earlier this week, will replace Ross Greenburg as president of HBO Sports in the coming days. Showtime officials would not confirm where Hershman was headed and HBO officials could not be reached for comment.

Hershman began working for Showtime in 1992 in the network's law department. He was named head of Showtime Sports in 2003. In 2007, Hershman brought MMA to the network when EliteXC debuted, and he stuck with the sport following the demise of EliteXC in 2008, striking a deal with Strikeforce in 2009.

Of course, this news comes at an interesting time for Strikeforce with all sorts of speculation about its future. Showtime officials would not confirm whether Strikeforce would continue to air on the network next year when its current contract expires, however, a network spokesperson did say that they are still as committed as ever to the sport.

UFC president Dana White has made no secret of the fact that he has never seen eye-to-eye with Hershman, however, UFC CEO Lorenzo Fertitta has been running Strikeforce and dealing with Showtime since Zuffa purchased the fight promotion in March.

Depending on who replaces Hershman, his departure could either signal the end of MMA on Showtime or breathe new life into the struggling Strikeforce brand. Conversely, Hershman's reported arrival at HBO could open the doors for MMA to air on the network for the first time in its history.