Eddie Alvarez vs. Michael Chandler Rescheduled for Bellator 58 on Nov. 19 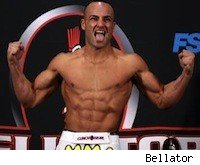 The injury that knocked Eddie Alvarez out of his scheduled October lightweight championship defense against Michael Chandler won't keep him sidelined for long.

The Bellator star is back healthy, and has agreed to face Chandler at Bellator 58 on November 19, the promotion confirmed late on Wednesday night.

The 27-year-old Alvarez has never lost under the Bellator banner, winning seven in a row since signing with the promotion. He won the lightweight championship in the promotion's first season, and has successfully defended it on one occasion with a unanimous decision over Pat Curran. He also has non-title wins over Josh Neer and Roger Huerta during that time.

Chandler was a collegiate wrestler at the University of Missouri who burst upon the national fight scene this year, romping through the season four lightweight tournament with wins over Marcin Weld, Lloyd Woodard and the highly regarded Patricky "Pitbull" Freire.

Chandler is 8-0 in his young career, which only began two years ago.