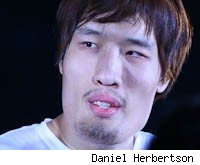 Seven-foot-two K-1 World GP in Seoul Champion and DREAM "Super Hulk" Hong Man Choi has been booked with assault following an October 8 altercation with a female customer at a bar he owns and operates in Seoul, South Korea.

The alleged assault occurred when a female customer refused to pay a tab at Choi's bar which turned out to be more expensive than she had anticipated. Following an argument, the female patron claims that Choi punched her in the face.

Posting on his blog on Wednesday, Choi vehemently denied punching the woman, stating, "She verbally insulted me. I just could not take it anymore. I just pushed her a little bit. I swear that I never punched her.

Choi continued, putting his (admittedly dormant) fighting career on the line by writing, "If I am lying, I will quit my career as a K-1 fighter."

The charges against Choi do seem dubious as witnesses have stated that the women pressing charges was heavily intoxicated, threw a glass at Choi's head, kicked and punched the former K-1 star and made derogatory comments about his parents. When the women brought up Choi's family, witnesses stated that he pushed the woman aside in an attempt to end the argument.

Korean reports do not indicate if the charges being leveled against Choi are civil or criminal, but the South Korean giant does intend to take legal action against the female customer if she, "continues lying about the incident."