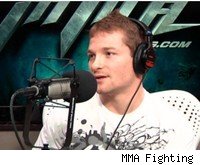 Zack Makovsky's nickname seems to apply to more than just his size.

Makovsky's "Fun Size" nickname is mostly a playful jab at his physical stature. But the Bellator bantamweight champion is making the size of the fun he has carry over elsewhere, too.

Makovsky said spending his time just trying to improve as a fighter and compete to the highest of his ability is what keeps mixed martial arts fun for him.

"I think I definitely am understanding how to compete in MMA more," Makovsky told host Ariel Helwani on Monday's edition of "The MMA Hour." "I really think I'm trying to put everything together. My mentality is probably the biggest part of it. I revamped my whole mentality, especially from when I was (wrestling) in college. I try not to care if I win or lose. I just try to have fun with it and do the best I can."


So far, that philosophy has translated quite well for Makovsky (13-2, 5-0 Bellator). On Saturday, at Bellator 54, Makovsky has what amounts to a stay-busy fight against Ryan Roberts. His 135-pound title will not be on the line. He won't put his belt up for grabs until next year, when he fights the winner of the ongoing Bellator bantamweight tournament.

Makovsky said he likes Bellator's tournament format – after all, winning the inaugural bantamweight tourney is what put him on the major MMA map. But at the same time, he said it has some drawbacks.

"Going into the tournament, I was unknown to the majority of the MMA community," Makovsky said. "I like that about Bellator – it's a tournament and you control where you go yourself. I like how they let you get there on your own.

"(But) there's a downside as far as once I won the tournament, I've had a lot of downtime. I fought six times in 2010, and I'll only fight twice in 2011 with no title fights. There's ups and downs."

Makovsky even joked that because of the downtime this calendar year, he may have been better off not winning the first bantamweight tournament – just making the finals. That way, he could compete in this year's bantamweight tourney and make more money.

Still, the product of the Fight Factory, in Philadelphia, where he trains alongside Bellator lightweight champion Eddie Alvarez, said winning the $100,000 tournament a year ago put him in the position, financially, where he can just concentrate on becoming a better fighter. He no longer has to pay the bills by being an assistant wrestling coach at Drexel University, where he competed collegiately.

"I wasn't making a living (fighting) by any means until I got into Bellator," Makovsky said. "My first fight, I fought for $300 to show and $200 to win. I saved a little bit from winning the tournament, but it's definitely different (not having a job). I'm very happy doing what I love for a living. I get to sleep in when I want and set my training schedule – so I'm living the dream."

Though he's on a seven-fight winning streak and holds a title for one of the most prominent MMA promotions in the world, Makovsky said he's not prepared to say he's a Top 10 bantamweight in the world. Not that he isn't confident in his skills, but it's just not his style.

"I think my skills are up there with those guys, (but) I don't like to say where I should be ranked," Makovsky said. "That's up to the media. I want to continue to grow and be the best I can be, and something like that would put extra pressure on myself. That's not where I'll have the most success. I'll have the most success when I'm focusing on me and getting better. Everything else will take care of itself."

Including, he hopes, the fun.