MMA Top 10 Pound-for-Pound: A Busy Time for the Best in the Sport 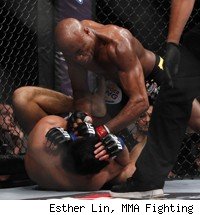 We mixed martial arts fans are spoiled right now. Of my Top 10 pound-for-pound fighters in MMA, seven have fought in the last two months, and the other three have fights scheduled in the next month. I don't believe there's ever been a time in the short history of MMA when we had this many opportunities to see this many great fighters in this short a period of time.

So now seems like a good time to revisit my Top 10 list, where Anderson Silva remains on top, Frankie Edgar is rising, and two heavyweights make the list as they prepare to fight each other in what may be the most significant fight in UFC history.

Top 10 Pound-for-Pound Fighters in MMA
(Number in parentheses is the fighter's rank in the last pound-for-pound list.)

1. Anderson Silva (1): Silva is still the best, and up next he'll get a chance to cement his legacy with a rematch against the only man who ever put him in any real danger inside the Octagon, Chael Sonnen. I believe Silva is going to make a statement with a sensational showing against Sonnen.

2. Georges St. Pierre (2): The Carlos Condit fight at UFC 137 will give St. Pierre yet another chance to show he's head and shoulders above the rest of the welterweight division. Some fans are starting to get bored with GSP because he keeps winning by decision and hasn't finished many fights, and I think those fans are going to be disappointed in the Condit fight: This looks like another unanimous decision victory for GSP to me.

3. Jon Jones (3): If Jones beats Lyoto Machida at UFC 140, his 2011 may go down as the best year any MMA fighter has ever had. Jones has absolutely demolished Ryan Bader, Shogun Rua and Rampage Jackson this year, and adding Machida to the list would make him 4-0 in 2011 while fighting some of the best light heavyweights the UFC can throw at him.

4. Frank Edgar (6): I'm moving Edgar up a couple spots on the list after he beat Gray Maynard and showed definitively that he's the best lightweight in the sport. UFC President Dana White said after UFC 136 that Edgar deserves to be No. 2 on the pound for pound list, but I can't get on board with that yet. White's explanation for having Edgar at No. 2 was, "The guy weighs 145 pounds, he's fighting at 155 pounds and beating everybody." But until we actually see Edgar fight at 145 pounds we have no idea if that's really true. Maybe a big part of Edgar's greatness at 155 is that he's fresher than his opponents because he didn't cut as much weight the day before. If Edgar were to move down to featherweight and beat Jose Aldo he'd have a good case for No. 1, but until he does it, I wouldn't rank him higher than GSP or Jones, and definitely not higher than Silva.

5. Jose Aldo (4): Aldo improved his record to 20-1 with a unanimous decision victory over Kenny Florian. It appears that Aldo will get Chad Mendes next, and Mendes's wrestling should make him a good test for Aldo. But Aldo-Mendes won't be a big money fight (Mendes is still not very well known, and Aldo hasn't proven that he can be a pay-per-view draw), which may be why White was hinting at a potential future Aldo-Edgar fight.

6. Dominick Cruz (5): Cruz suffered a hand injury against Demetrious Johnson, which may keep him shelved for a few months. Whenever he's ready to return, he's likely to face the winner of the upcoming Urijah Faber-Brian Bowles fight. Cruz has already beaten both Faber and Bowles, but the UFC doesn't have many better bantamweight options for Cruz.

7. Cain Velasquez (8): The undefeated heavyweight champion will fight Junior dos Santos on Fox in a bout that's been getting heavy promotion during the baseball playoffs and NFL games. It should easily be the most-watched MMA fight in American history, and it's Velasquez's chance to become a major sports star.

8. Shogun Rua (9): After beating Forrest Griffin in August, Rua will make a quick turnaround and take on Dan Henderson in November. Although Jones completely dismantled Rua, Shogun is still the No. 2 fighter in the UFC's best weight class.

9. Junior dos Santos (10): I don't think anyone in the sport hits as hard as dos Santos, and that makes him an easy sell to the casual audience that will tune in on Fox. Dos Santos will give Velasquez everything he can handle when they meet for the heavyweight title.

10. Gray Maynard (7): Does Maynard still belong in the Top 10, despite his loss to Edgar? I think he does: He's still 1-1-1 in three fights against the best lightweight in the world, and in non-Edgar fights he's beaten good opponents like Kenny Florian, Nate Diaz, Jim Miller and Roger Huerta. But if you have someone else ahead of Maynard on the pound-for-pound list -- someone like Rashad Evans, Lyoto Machida, Gilbert Melendez, Jon Fitch, B.J. Penn, Joseph Benavidez or Dan Henderson -- I won't argue.