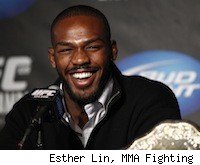 Jon Jones makes it clear he still wants Rashad Evans, and we know Evans still wants him. But the road to each other has been filled with potholes and detours, and the waiting game continues, though neither is ever very far from the other's view.

With the specter of Evans hanging over the proceedings, the UFC on Wednesday officially announced UFC 140 and its main event of champion Jones against challenger Lyoto Machida.

The surprise main event was originally released by UFC president Dana White last week, after Evans' follow-up doctor visit determined he would need more time to rest his injured fight hand. Of course, the new pairing -- cemented by Jones, Machida and White at Toronto's Air Canada Centre -- promises a vastly different dynamic both in and out of the cage, with no past history between the men. For Jones, who had been expecting the long-awaited grudge bout, that's not necessarily a bad thing.

More: White Calls Toronto UFC's 'Fight Capital of the World' | UFC 140 Fight Card
"I would prefer each fight to be a little more respectful. It is martial arts. But I'm OK with the other side of it, too. I understand there are two different fan bases. Some people like more of that warrior spirit, discipline and honor, and other people like more of the cage fighter, I'm-gonna-knock-you-out type stuff. So I'm getting more comfortable with both of them, and it is what it is."

That said, Jones (14-1) was clearly disappointed his chance at Evans was scuttled, even if he does have great respect for Machida, who is also a former UFC light heavyweight champion.

Jones said he fully realizes that just because Evans will not be standing in front of him on December 10, there won't be any less to lose if he should fall to defeat. As such, he doesn't expect motivation to be an issue, even with this fight coming so close on the heels of his successful September 24 title defense against Quinton "Rampage" Jackson.

"I realize what I could lose in the fight that's in front of me, so when it comes to the question of getting up for the fight, it's definitely not an issue," he said. "And as far as getting up for the Rashad Evans fight, after all the drama of last year or so, it's a fight I absolutely cannot lose. I'm actually taught to think that no fight is a big fight. Don't fight the legend, just fight his body and see what happens.

If Jones is to look past Machida, it could end up as a grave mistake. Despite losing two of his last three, Machida (17-2) is still a complex fighter with knockout power and a strong all-around game. Jones acknowledged that he's "never competed against anyone like him," and said he would spend time studying and learning Machida's tendencies.

Machida, as usual a man of few words, admitted that the initial offer to fight Jones took him by surprise, and that he believes his experience will "speak louder in this fight." Machida did reveal one interesting nugget though, saying that UFC middleweight champion Anderson Silva has already called him about working with him in preparation for the fight.

"I guarantee on December 10, I will very well prepared, and I can overcome his athleticism with my technique," Machida said.

If Jones emerges successful in the fight, he will have won four fights in 10 months, and run through a gauntlet of three former champions in the process. He's also gone from relative obscurity to fame in that time, a transition that has been known to affect many.

For Jones though, everything feels just about right.

"When I joined the sport, I always envisioned wanting to be the best, and trying to be the champion. So I tried to carry myself and think in that type of life, as if it was already so, even before it happened. So now that I'm here, I have this feeling as if I'm right where I'm supposed to be, and right where I worked to be, so I feel comfortable with everything that's happened."

UFC 140 will mark a quick return to Toronto for the promotion, which put on its landmark UFC 129 show in April, drawing over 55,000 fans and a gate surpassing $11 million at the Rogers Centre. The Air Canada Centre is a more traditional sports arena that seats just shy of 20,000 fans in its maximum seating configurations. In his remarks during the press conference, UFC president White called Toronto "without a doubt, the strongest market on the planet." In Jones, the promotion will be showcasing one of the strongest fighters on the planet, even if he comes with an unexpected opponent.