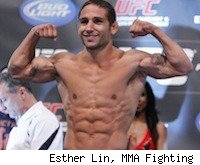 Just a few days before traveling to Houston last weekend, Chad Mendes was in Wyoming's wide open spaces, hunting mule deer. But now, his sights will shift to some other, much more dangerous big game.

Mendes was in attendance at Houston's Toyota Center to watch Jose Aldo's win over Kenny Florian at last Saturday's UFC 136, and he believes he'll receive the next opportunity to fight for the featherweight championship. At least in the immediate aftermath, UFC president Dana White seemed to agree, saying he was "pretty sure" it would happen. So it's likely just a matter of when.

Mendes hopes it's soon. Above all else, the native Californian likes to challenge himself, and to stay busy. That's why the unbeaten (11-0) 26-year-old risked No. 1 contender status a few months back to fight at August's UFC 133.

"My time is going to come," he said. "I've only been doing this for three years. I've got 11 fights into my career. I've got plenty of time. That belt's going to be mine sooner or later. It's just hurry up and wait."

Coming from his wrestling background, Mendes says that he would fight every month if he could, feeling that constant competition would keep him sharp. But now he's willing to wait a bit for the chance to take home his division's most coveted trophy.

In the meantime, he will find other ways to occupy himself. Mendes is an avid outdoorsman, who likes to fish and hunt. And recently, he ran his first-ever half-marathon. Asked how he did, Mendes said "not too bad, but not anything great," saying that his "little, short legs" didn't work well over long distances.

Turns out, he did very well, as research shows he clocked 1:40.52 in the Los Gatos (CA) Jungle Run Half-Marathon, finishing 11th in his age group. Even more impressive, he did the race in the midst of his preparation for the Rani Yahya UFC 133 fight, with about one month to go.

Mendes said he got inspired to add more running and cycling into his training after learning more about Mike Tyson's pre-fight preparations, and said he believed it helped him in the bout against Yahya, leaning out his body and improving his stamina.

In his mind, the latter could pay big dividends against Aldo, who looked good in the late rounds against Florian, but struggled badly in the last round of his UFC 129 fight against Mark Hominick.

"He started grappling a lot more and got tired," he said. "It's a different type of conditioning. I know I'm going to be in great shape in that sense, the grappling sense. And I know he's going to be in great shape in the standup part, because he's going to go out there looking to finish me with some kind of knee or big shot from his hands. But taking him into my world, taking him on the ground and making him work to get up, it's going to tire his ass out, and I'm looking forward to taking that belt from him."

Mendes is able to break down his impeding matchup objectively, noting that his standup is "nowhere near" Aldo's. But if you acknowledge that, he says, you must also acknowledge that Aldo's wrestling, while "pretty good" for someone who didn't grow up doing it, is not in Mendes' league.

Mendes began wrestling at the age of five, competed all through high school, and was a two-time All-American in college. To date, his wrestling has been one of his best weapons, as he's notched 27 takedowns in his six fights under the Zuffa banner. He's also never been taken down. But his striking has been a bit undervalued, as he's landed 47 percent of his significant strikes, according to FightMetric. By comparison, Aldo lands 49 percent of his significant strikes and has stopped an impressive 94 percent of takedown tries against him, making the matchup quite a challenge for Mendes.

"I think with my wrestling credentials, my strength, my athleticism, I don't think he's faced anybody like that yet," he said. "And for me to get in there, put him on his back and take him out of his comfort zone, I think that's going to be key to beating a guy like that."

Prior to the fight, Mendes predicted an Aldo win, and more than that, he hoped for it. The way he figures it, if you're going to go try to win the belt, you might as well try to take it from the best. For better or worse, the big-game hunter has his target set.

"He's the guy that everyone looks at as unbeatable, and he's got this hype around him like no one can beat him," Mendes said. "I want to be the guy to get in there and take that belt from him."