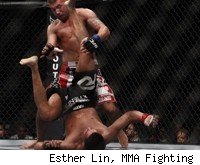 Despite two pay-per-view caliber matchups, the UFC 136 Prelims show on Spike TV Saturday drew an unusually small audience of only 1.0 million viewers and a household rating of 0.8.

The viewership for the UFC 136 prelims show is the lowest for a live prelim show on Spike TV and surpasses only the two preliminary shows aired on ION.

The preliminary bouts series was coming off a strong performance from the Sept. 24 UFC 135 undercard show, which drew an average of 1.6 million viewers and an average 1.0 household rating. The live fights for the UFC 135 undercard featured Tony Ferguson vs. Aaron Riley and Tim Boetsch vs. Nick Ring.

The next UFC Prelims card, for UFC 137 on Oct. 29, is expected to feature Donald Cerrone vs. Dennis Siver and Tyson Griffin vs. Bart Palaszewski.