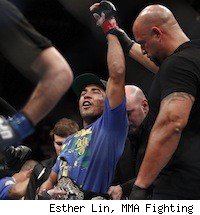 Just in case UFC president Dana White had any doubts about what he would do next with the middleweight division -- and before UFC 136, he seemed a bit torn -- Chael Sonnen made his case with his actions and his mouth. Afterward, it seemed clear that White would grant Sonnen his wish for a rematch with division champion Anderson Silva.

According to White, it's a matchup that Silva wants, too, because, as he told MMA Fighting, Silva "hates him with a passion." The funny thing is, Silva should love Sonnen. He should send him thank you cards. And 20 years from now, he'll probably feel that way. Because regardless of his words, Sonnen has helped to raise Silva's profile and to define his career.

Years from now, when Silva is old and we have a stronger grasp of MMA history, the win over Sonnen will be seen as the defining one of his career. It was a victory that only a champion could have pulled out. Silva was fighting with a severe rib injury, and was trailing badly on the judges' scorecards -- 40-34 on one judge's card. The fifth round started much the same as the first four, with a Sonnen takedown. But Silva somehow willed one last gasp triangle that caught Sonnen and forced a tapout.

Of course, master fight promoter Sonnen barely waited to begin talk of a rematch. It was at the post-fight press conference that same night when he said, in Silva's presence, "Here's the truth: if the commission would sanction it and Dana would move, I would fight him again right now."

If we've learned anything about White over time, it's that he loves a fighter who proactively campaigns for opportunities. Passion moves him. Whether you love or hate Sonnen, you can't deny his passion. And after his first performance against Silva, you can't deny he has a chance to win. That should mean big interest in the fight, and big business for the event, and even Anderson Silva should be able to appreciate that.

Edgar will take off the next two weeks or so, and he won't be back in the cage until early next year. Gilbert Melendez has been mentioned, but for now it seems like Melendez's status is up in the air. That makes it a toss-up as to whether Edgar will face him next, or a UFC lightweight.

Gray Maynard
Maynard seemed heartbroken after UFC 136, and you can't blame him. He came within a punch or two of winning the lightweight title in two different fights and couldn't close it out.

There is a silver lining though, as his competitive performances have shown that he is clearly capable of giving the world's best a run for their money. And after having been tied up with Edgar so long, there are plenty of fresh matchups out there for him.

Prediction: He faces the loser of UFC on FOX 1's Henderson vs. Guida fight

Jose Aldo
Aldo received some criticism for his win over Kenny Florian from those who believed he was too conservative with his offense. But with the way Florian was attacking him, Aldo did the right thing. Florian was looking to take away Aldo's explosiveness by either taking him down or grinding him against the cage. By FightMetric's count, Florian tried 19 takedowns (and only completed one).

Even if you didn't watch the fight, from those number you can surmise that Florian didn't give Aldo much room to operate. Aldo had to worry about defense for good reason, and he did a great job with it. It may not be any easier in his next fight.

Kenny Florian
At least in the immediate aftermath of UFC 136, Florian looked like a man who was done with fighting. Verbally, he wouldn't commit to either continuing or retirement, and rightfully, Florian should take time to consider all his options. At 35 years old, Florian is still a very good fighter, and he could certainly continue on and seek out intriguing matchups if he so chose. But Florian has always said his goal was a UFC championship belt, and now it appears that will never happen. That leads me to wonder if he will have the proper motivation to go through the grind of training camps. Hopefully he makes a decision he can embrace wholeheartedly.

Prediction: Florian retires and continues his strong work in broadcasting

Chael Sonnen
Sonnen's performance Saturday night was nothing short of systematic destruction. Sonnen finished off Stann with the arm triangle choke and got up off the canvas with a stoic, focused look on his face. It seemed like there was something on his mind other than Stann, and we quickly found out what it was. Bring on the rematch.

Brian Stann
Stann is a strong, powerful dude, but he had no prayer of stopping Sonnen's takedowns. He'll always be a tough matchup for strikers, but wrestlers are always going to try to follow the blueprint laid by Sonnen and Phil Davis. Fortunately for Stann, there aren't an overwhelming number of wrestlers. Anyway, it's time to retool and reload for Stann.

Prediction: Stann might have a bit of a wait until his next fight. I'm thinking he could face Mark Munoz if Munoz should lose to Chris Leben next month, or if not, Stann gets someone like a returning Alessio Sakara.

Joe Lauzon
Lauzon has some of the best finishing instincts in the UFC, fearless in his attempts to close out a fight. His win over Melvin Guillard was a shocker, entering the fight as a massive underdog. Despite the big win, Lauzon's only 3-2 in his last five, so it's hard to figure exactly where he fits in the lightweight hierarchy.

Anthony Pettis
When the UFC announced Pettis vs. Jeremy Stephens, no one was expecting a slow grind of a fight. And while it wasn't Pettis' best performance, he proved he could go in there against a rugged, powerful striker and win. Ultimately, Pettis isn't going to win a title with his wrestling, so I don't expect him to employ the same kind of game plan against anyone. Let's get him back in there against another striker.

Stipe Miocic
You may or may not have seen the debut of Miocic, a 6-foot-4, 240-pound heavyweight who outlasted the always tough Joey Beltran during the prelims. Miocic looked good but not great against a guy who is among the UFC's most durable heavyweights. But even though he has plenty of work to do, it was a positive first step.