Gilbert Melendez vs. Jorge Masvidal Official for Strikeforce in December 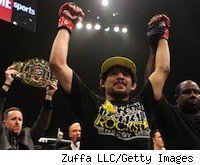 Gilbert Melendez will have to wait a little longer to fight in the UFC.

Strikeforce announced on Tuesday that "El Nino" will in fact defend his lightweight title against Jorge Masvidal on Dec. 17 in San Diego, Calif. The card will take place at Valley View Casino Center, and tickets go on sale to the public on Saturday, Oct. 15.

Melendez met with UFC president Dana White over the weekend to discuss the possibility of unifying the Strikeforce and UFC lightweight title but no deal was reached.

"I just wanted to discuss my future with the organization," Melendez said Monday on The MMA Hour. "I just expressed that I want to fight the best."

Melendez (19-2) has won his last five fights in a row. He most recently defeated Tatsuya Kawajiri via first-round TKO at Strikeforce: Diaz vs. Daley, which also took place in San Diego.

Masvidal (22-6) is 2-0 since returning to Strikeforce, defeating Billy Evangelista and KJ Noons.

The main card will air live on Showtime.